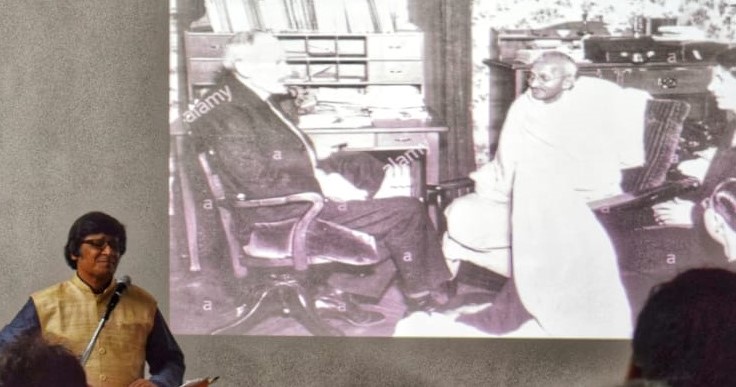 Nobel laureate Romain Rolland, a French writer was one of the foremost European popularisers of Gandhi and even wrote his biography.

The Alliance Française du Bengale hosted an event titled Gandhi and Rolland: A Quest for Light in Troubled Times– a talk delivered by distinguished scholar and translator Chinmoy Guha on May 25, 2019. The talk was focused on how Rolland was influenced by the Indians and specifically Gandhi.

It is considered that Nobel laureate Romain Rolland was one of Gandhi’s first and most effective European popularisers. Rolland took an interest in Gandhi in the years after the First World War, when he was looking for new ways out of the dire situation in which European civilisation found itself. They became friends after Rolland published a biography on Gandhi, written in French and later translated into other European languages, which made Gandhi known all over Europe. Their friendship came to climax when Gandhi visited Rolland in Switzerland, after his journey to London for the Round Table Conference in 1931.

Guha talked about how Rolland came to know about Gandhi in 1920 after the war. He was attracted to Indian culture and philosophy even during the war and in the post-war years developed a friendship with Rabindranath Tagore, the great poet, Kalidas Nag, a student and Dilip Kumar Roy, a musician. In his conversations with Tagore and Roy, he came to know more about Gandhi along with being influenced by Gandhi’s writings and ended up writing a short biography which became highly successful. Rolland was conscious of the fact that he had no contact with Gandhi and his first letter to him was a humble apology for any errors he had made.

During the talk, Guha even quoted Rolland on his first meeting with Gandhi in Switzerland in 1931. Rolland wrote to an American friend, “The little man, bespectacled and toothless, was wrapped in his white burnoose, but his legs, thin as a heron’s stilts, were bare. His shaven head with its few coarse hairs was uncovered and wet with rain. He came to me with a dry laugh, his mouth open, like a good dog panting, and flinging an arm around me leaned his cheek against my shoulder. I felt his grizzled head against my cheek. It was, I amuse myself, the kiss of St Dominic and St Francis.”

“A moment of crisis in civilisation after the First World War, Rolland thought Gandhi and his philosophy of non-acceptation rather than non-violence could save the world. He regarded Gandhi as ‘Christ of India’ and the last defender of the human,” said Guha to Media India Group. The talk also encompassed the correspondence between other Indians with Rolland regarding his perceptions of Gandhi and his principles.