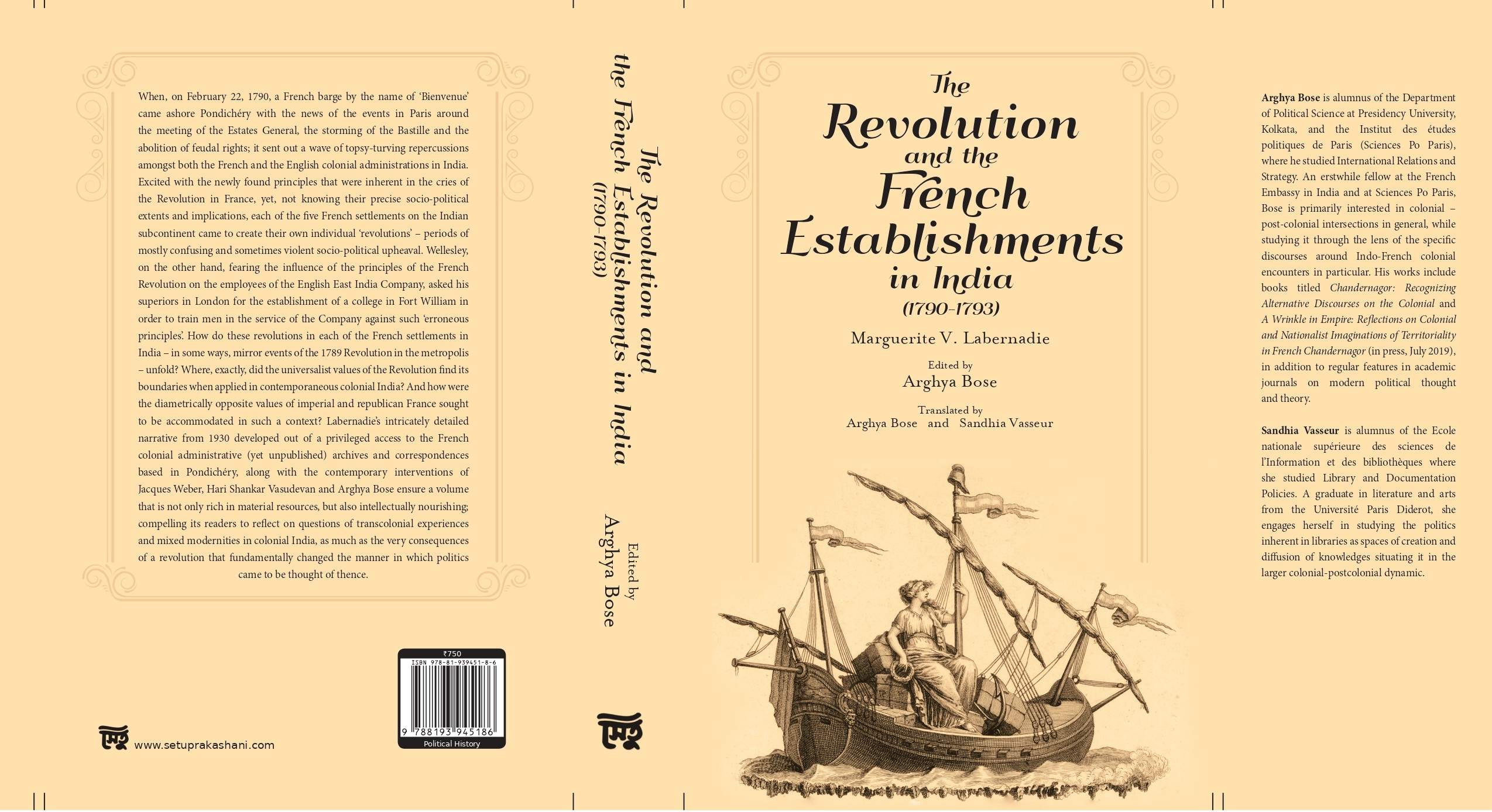 The Alliance Française du Bengale in association with the Consulate General of France in Kolkata, the Institut Française en Inde and Setu Prakashani hosted the book launch for a translated edition of The Revolution and the French Establishments in India (1790-1793), on July 4 to kickstart the celebrations of Fête Nationale (French National Day) in Kolkata.

The book originally written by Marguerite V Labernadie in 1930, was titled La Révolution et les Éstablissements Française en Inde in French and was published by the Société de l’Histoire de l’Inde Française (Society of the History of French India) with a preface from the erstwhile governor of French India, Edmond Gaudart. The present volume has been edited by Arghya Bose, with contributions from Jacques Weber, professor emeritus, Université de Nantes and associated member, EHESS; and Hari Shankar Vasudevan, professor, department of history, University of Calcutta. Bose has also co-translated the book from French to English with Sandhia Vasseur.

The French National Day is observed on July 14 in remembrance of the Storming of the Bastille in 1789, which marked a turning point in the French Revolution, as well as the Fête de la Fédération which celebrated the unity of French people on July 14, 1790. This book by Labernadie covers the effects and repercussions of the Revolution in the French settlements in India.

The event was graced by the presence of Mme Virginie Corteval, consul general of France in Kolkata, with Jawhar Sircar, author and public intellectual, chairman of Centre for Studies in Social Sciences (CSSS) as guest-of-honour and S V Raman, retired programme director of Goethe-Institut/ Max Mueller Bhavan Kolkata and programme consultant to the Victoria Memorial Hall as the moderator for the event. The book launch was followed with lectures by professor emeritus Sobhanlal Dattagupta, University of Calcutta, professor and head of the department of political science, Abdus Samad Gayen, and professor Garima Dhabhai from the same department of Presidency University, Kolkata.

Arghya Bose, executive assistant to the director, Alliance Française du Bengale, editor and co-translator of the book had come across the French original by Labernadie at the Bibliothèque Nationale de France during his student exchange programme stint at Sciences Po Paris in 2015. “I have always been interested in Indo-French culture as I hail from Chandernagore, (a former French colony in east Indian state of West Bengal) and when I came across this book on how the French Revolution had its repercussions on its Indian colonies, I was fascinated and decided to translate the book into English so that it could reach a larger audience,” said Bose while talking to Media India Group. He also added that the book may provide a clearer perspective on the French colonies in India which has remained a bit undiscovered due to their documentation in French, a language not as common in India as English.

While speaking to Media India Group, Sandhia Vasseur, an alumna of Ecole Nationale Supérieure des Sciences de l’Information et des Bibliothèques and co-translator of this work said, “I just started to work on this book last year after Arghya Bose asked me to collaborate on the project as he became aware of my maternal roots in Pondicherry. The work not only presents the French Revolution and its consequences in the French settlements in India but also helps us to understand the thought processes of a French settler in India in the 1930s. The purpose of translating this book was to democratise the knowledge and encourage other Indians to know about the other facets of colonialism in India, where they normally only study about the British colonialism and its experiences.”

Jawhar Sircar, the guest-of-honour at the launch commended the work as a valuable addition for Indian researchers to learn about French colonial history in India.

A talk on Gandhi and Rolland

An art exhibition in Delhi and its various hymns

Songs of India- telling the country's cultural tale in colours