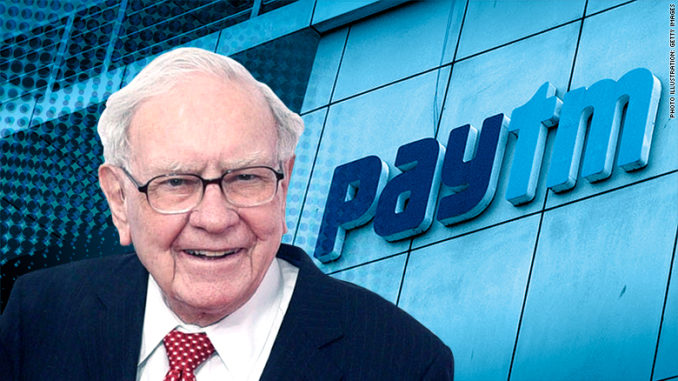 The investment by Warren Buffett’s conglomerate – Berkshire Hathaway – in Paytm brings a fresh wave of confidence in the Indian e-tailer space. It will reportedly invest around USD 360 million to pick up about 4 pc stake in One97 Communications, the parent company of Paytm. The investment by one of the smartest investors in the world comes as an endorsement for Paytm, Indian market leader in digital payments.

Berkshire Hathaway’s move is seen as an attempt to test Indian waters again, before making a full-fledged move. In 2011, the company tried its hand in India, when it entered the market as a corporate agent of Bajaj Allianz General, but it exited two years later owing to the lack of profitability and laws that constrained ownership by foreign companies.

Two years ago, Paytm saw a sizable growth in traffic when India unexpectedly pulled 86 percent of its cash from circulation, leading to a massive cash crunch. That allowed digital payment firms to provide an alternative mode of payment to the Indian consumers. Paytm, which specialises in mobile payments, currently has 250 million registered users and processes 7 million transactions each day.  Paytm’s leading shareholders include Japan’s SoftBank, Chinese tech giant Alibaba, and Taiwan’s MediaTek.

Several Berkshire portfolio companies have operations in India but it had not made any direct investments, until now. Buffett’s choice of investing in a digital payment company is also first, as historically he has been a reluctant tech investor.

Why Paytm is the right choice

Digital payment system has gained massive popularity given its safe and hassle-free usage, as all payments are made in digital mode within seconds. Paytm was founded in 2010 and is now India’s largest digital wallet. Along with a digital payment system, Paytm also operates its Payments Bank, which is India’s first mobile bank and an e-commerce website called Paytm Mall, as an attempt to compete with giants like Amazon and Walmart-backed Flipkart. it is also looking to launch its mutual fund distribution platform under Paytm Money Ltd.

Founder and CEO of Paytm and India’s youngest billionaire, Vijay Shekhar Sharma, said in his blog that Berkshire’s experience in financial services, and long-term investment horizon, will be a huge advantage in Paytm’s goal of bringing 500 million Indians into the mainstream economy through financial inclusion.

With this investment, Berkshire’s investment manager Todd Combs will join the eight-member board of the company. Sharma believes that Todd’s banking, fin-tech and payments expertise, along with his experience will help the firm understand how the rest of the world is doing in the digital payments business. “It is my honour to welcome Todd to our board, where he will bring his wealth of experience to guide our management team.” he had added.

The foray into India’s ultra-competitive digital payments space is not without risks. Although the market is expected to grow five-fold to $1 trillion in the coming future, the rivalry is intense with several players, mainly the state-backed Unified Payment Interface (UPI). Unlike digital wallets, which do not earn users any interest, UPI apps simplify interbank transfers, making it a preferred option for some. According to estimates, UPI-based payments have already cornered 51 pc of the entire digital payment market in India, within two years of launch.

Feeling the heat, Paytm and other mobile wallet companies have been forced to offer more services in order to retain customers. Also, as the digital payment market is becoming increasingly competitive, especially with the launch of Google Tez and WhatsApp testing its own payment services, Paytm needs deeper pockets to survive in the long run. Google launched its mobile payments app Tez in India last year, which it rebranded to Google Pay, has now teamed up with four Indian banks, including HDFC Bank and ICICI Bank, to offer instant, pre-approved digital loans to customers. WhatsApp, the mobile messenger owned by Facebook, is also testing a similar service which could provide a peer-to-peer (P2P) payment facility to its users.