If 2013 was a turnaround year for India’s information technology (IT) industry, 2014 is likely to be one when it regains some of its lost shine coupled with growing demand for outsourcing services from Europe. However, talent has been emerged as a challenge for the industry.

The resilient $270-billion plus Indian IT industry returned to the higher growth trajectory in 2013 and is hoping to gain momentum in 2014 for a greater share of the global multibillion dollar outsourcing market. Putting behind a turbulent 2012, the industry consolidated its presence in the software services sector, with its top four IT bellwethers – Tata Consultancy Services (TCS), Infosys, Wipro and HCL – posting better results to register a healthy 12-14 per cent growth thus far as against 10 per cent last fiscal (2012-13).

“2014-15 will be a better year than 2013-14, according to the initial talks we have had with our clients. Overall, we expect good growth,” N Chandrasekaran, Chief Executive and Managing Director, TCS told to a daily newspaper. Expressing similar thoughts, an analyst from the research and analyst firm Gartner, said, “I think the turnaround has already started in 2013; it’s just not that visible yet. That will accelerate in 2014. But it will also highlight individual companies’ sales and marketing capabilities. That will play a huge difference in 2014, when fortunes will be decided by sales and marketing, not the quality of their technical capabilities.”

International Data Corporation (IDC) has forecast that the information technology market size in India would grow to $44.8 billion in 2014 from $35.1 billion in 2012. In its report, the India IT Market Overview 2013-14, IDC said the growth will be rapid in emerging Tier-II and Tier-III cities, emerging segments such as upper mid-market and emerging verticals such as education and healthcare.

The expected growth of the industry will be driven largely by the growing demand from Europe. According to the industry body NASSCOM (National Association of Software and Services Companies), North America may account for the lion’s share of India’s IT exports but, growing demand for outsourcing services from Europe is expected to drive the IT sector in 2014. “Europe is growing faster than the US. That is something we saw this year and this will only gain momentum. There is a lot of latent demand in the region, which will drive growth for the sector,” said Som Mittal, the immediate Past President of NASSCOM.

Indian IT companies are diverting their attention towards Europe as they face uncertainty in the US market, where new immigration laws could drive up costs of sending workers on short-term visas. “The companies are bullish on the European market, which is evident from the acquisitions that some of them have made in the recent past,” said Mittal.

“In the wake of the Sub-Prime crisis and subsequent economic recession in the US, the companies there started cutting down costs and one of them being IT expenditures. Because the majority of the IT companies in India have an export driven business model and majority of it is to the US, the companies have been facing a lot of heat. Some of the clients of these IT companies have gone bankrupt; some others have incurred heavy losses (Citigroup, Bear Sterns, and HSBC, etc.) The IT companies should therefore explore options in Europe,” the analyst from Gartner said.

It is observed that competitive markets have emerged in Latin America, Eastern Europe and South East Asia. Moreover, there are emerging economies present in these areas like Brazil, Russia, etc. The IT companies have already forayed in these countries for two primary reasons: first, it provides them to take advantages of cost-effectiveness in these areas due to new talent pool, lower wages and greater advantage by making their exports cheaper and competitive. Second, places like Mexico have emerged as a major outsourcing and offshore development centre for the IT companies due to the proximity to their major business clientele in the US. This not only provides costeffectiveness, but also helping the client in round the clock service providing environment.

The highlight of the year is the return of the industry’s icon and Infosys co-founder N R Narayana Murthy as executive chairman in June to put the global software major back into reckoning after it was found faring behind its peers due to combination of factors. Though Murthy, 67, came back from retirement to revive the company’s fortunes, bringing his son Rohan Murthy as his executive assistant, the $7-billion Infosys also saw eight of its top executives, including two board directors quitting the company.

The year also saw Infosys competitor, Wipro hiving off its non-IT business in April into a separate enterprise by de-merging its consumer care & lighting, infrastructure engineering and medical diagnostic product & services business from its global software services and products business.

Keeping pace with disruptive technologies and new delivery platforms, the industry has diversified its service offerings to analytics, mobility, cloud, social media and emerging verticals such as healthcare and medical devices. A top industry representative said, “India is the only country to offer such a wide range of offerings spanning IT services, BPM (business process management), engineering, R&D, internet and mobility and software products. The internet and mobile platforms are enabling the development of low-cost products not only for enterprises, but also consumers and citizens.”

The industry is also investing in technology and talent to explore opportunities like smart computing, anything-as-a service and the small and medium businesses.

Though attrition remained higher than last year, especially among the bellwethers, campus hiring and fresh offers declined during the year, as companies consolidated operations than invest in human capital to make more techies sit on the bench waiting for new projects. The industry added 188,000 jobs last fiscal, taking the total number of direct jobs to three million.

“With a stream of recovery in west, the over-all hiring scenario in Indian IT industry is expected to see an upswing in year 2014. With many new start-ups coming into existence, lateral hiring for specific skill-sets and domains will gain pace but the real challenge will be for fresh graduates who fail to grab a chance from campus. Fresher’s hiring will continue to be under pressure this year too,” said Chandrasekaran. According to him, SMAC (social, mobile, analytics and cloud) is throwing up huge opportunities as firms want to optimise investments in current technology and drive growth by using digital technologies and platforms. The digital forces of SMAC will reach mainstream status in 2014 and create many new job requirements.

Over the years, India has emerged as the key destination for global sourcing of IT & ITeS accounting for around 52 per cent share in the global sourcing market during FY13. While, the growth of the IT & ITeS industry has moderated in the past couple of years due to global economic slowdown, there is still huge growth potential with opportunities imminent in both mature and emerging services and verticals. 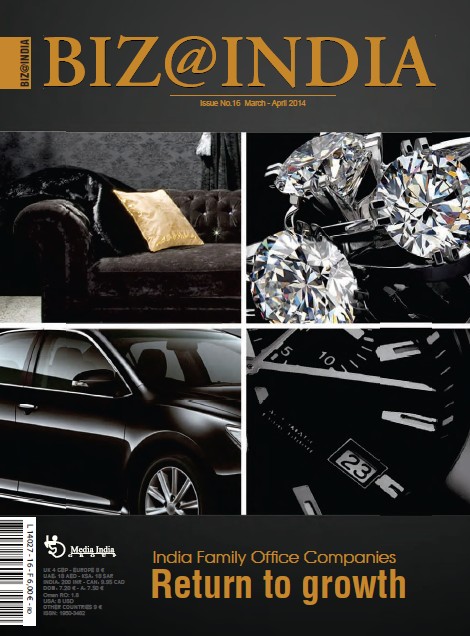 Biz@India has published this unique issue on the occasion of the first ever family office meeting in India. Despite economic slowdown, UHNWIs in India has shown growth and India is on the sixth positi... Read more

EIFE One Year of Extensive Growth

One Year of Extensive Growth
Close

EIFE One Year of Extensive Growth

One Year of Extensive Growth