For centuries, these gigantic beasts have been man’s companions in war and peace. Displaying valour on battlefields and bearing burden on farmlands, worshipped in temples and tamed in circuses — elephants are truly multifaceted.

They have been widely featured in literature, cinema and politics as well. They have made their way from the wild to the domicile confines. Considered intelligent, humble and lovable, elephants are held in high echelons spiritually in many countries. Yet, they continue to be slaughtered to satisfy man’s greed for ivory. According to the World Conservation Society, an estimated 800,000 elephants have been killed over the last three decades. This speaks volumes for the global ivory trade and man’s insatiable greed. No wonder conservation efforts have picked pace across the globe to save these mammals from poachers.

Elephants are also losing their natural habitat to the development of agricultural and infrastructural projects.

The Buddhist nation of Thailand, known for its tropical beaches, opulent royal palaces, ancient ruins and ornate temples, also has ultramodern cityscapes next to quiet canal-side communities and casinos. This southeast Asian country offers not only manly pleasures to millions of tourists but also gives much-needed succour to the most hunted pachyderms, by nursing and nurturing them in nature parks.

Millions of tourists from across the globe flock to Thailand for obvious reasons — to relax and discover tropical beauty. One of the fascinating features of tourism in Thailand is elephant trekking, which came into existence after the Thailand government banned logging in the country in 1989.

It is the northern part of Thailand that is dotted with several elephant relief and rehabilitation centres. Of course, elephants can be domesticated in this country, just like horses, donkeys and oxen. Therefore, there are private nurseries too.

Elephants prominently figure in all the three fundamental elements of collective Thai identity — nation, religion and identity. Way back in 1963 the white elephant was declared the national animal of Thailand.

As ban on logging rendered thousands of elephants and their mahouts (trainers) unemployed, the successive Thai government was forced to think of alternatives, and that is how elephant tourism developed.

Northern Thailand is dotted with hundreds of Baan Chang – dedicated elephant camps, nature parks or relief and rehabilitation centres. Located in Chiang Mai, Lampang, or far off Chiang Rai, tourists can spend quality time with these gentle giants, trek with them, watch them play soccer, ride them, see them paint, bathe them, feed them and participate in a variety of activities with them.

Characterised by several mountain ranges from Myanmar to Laos, northern Thailand is bound by the Salween River in the east and the Mekong in the west, and therefore, is the ideal home for elephants. About 700 kilometres away from the capital, Bangkok, Chiang Mai and other districts in northern Thailand are well-connected by roads and flights.

Tourists wanting to visit this part of Thailand and experience elephants can book their tours in advance on internet. Depending on the depth of one’s pocket, the tour packages offer experiences that last half a day to a month.

The two-year-old Elephant Jungle Sanctuary, an ethical and sustainable eco-tourism project located approximately 60 km from the city of Chiang Mai in Northern Thailand offers a half-day morning trip for Baht 2,500 (66 Euros) for an adult, Baht 1900 (50 Euros) for children below ten and free of cost for kids below three. This is by far the cheapest. The charges for overnight visits are double. An adult person pays Baht 4,900 (INR 9,800), a child below ten years is charged Baht 3,900 (INR 7,800) and an infant below three years is charged Baht 3,000 (INR 6,000).

Founded in July 2014, the sanctuary is a joint initiative by members of the Karen hill tribes and Chiang Mai locals who were concerned about the welfare of the elephants in Thailand.

At another elephant rescue and rehabilitation centre in Chiang Mai, a day-tour at the Elephant Nature Park costs Baht 2,500 (INR 5,000) and overnight tours can be undertaken at Baht 5,800 (INR 11,600) per person.

The Thai Elephant Conservation Centre in Lampang that offers elephant rides as part of their home stay and trekking programmes, charges anywhere between Baht 3,500-9,500 (INR 7,00019,000).

In some of these camps the charges include transportation to and from the guesthouse, a delicious vegetarian buffet, a knowledgeable guide, and a fun-filled day bathing, feeding, and learning about the elephants.

Group travel could fetch some discount. But, by far this is the cheapest deal available. More importantly, as demand is quite high, reservations need to be made in advance before visiting these elephant camps.

Unlike the usual national sanctuaries and zoological gardens, the visitors do not merely watch or shoot with a camera. Instead, they enjoy an experience of a lifetime by getting really up close to these elephants.

It’s a home and a safe haven for these pachyderms. It is a place where they are not forced to work or are ill-treated.

At the Elephant Nature Park, established by award-winning conservationist, Sangduen “Lek” Chailert, over 16 years ago, not only are the injured and mistreated elephants rescued but tourists are educated about responsible practices.

At Lampang, the emphasis is on interaction with an elephant as a mahout, the person who rides an elephant. The centre also has an onsite elephant hospital, where mistreated and abused elephants who have been overworked at trekking camps in the past or undergone forced breeding, have been drugged and reduced to begging on the streets, are cared for.

Many of them bear permanent injuries from the horrific torture they have had to endure at the hands of their owners. Known as phajaan or the ‘crush’ that originated in India, elephants have been known to be subjected to medieval brutalities — confined to small cells, beaten, starved, deprived of even sleep to break their spirit and submit to owners’ calls and commands. Barring some new-born calves, all the old elephants bear tragic scars of a ruthless past.

In early January, Yai Bua, an old cow elephant, arrived at the Elephant Nature Park.  She was very weak and unable to stand on her legs. After some treatment, old Bua today is enjoying her retirement and savouring her freedom too.

Tourists to these elephant camps are encouraged to get involved during feeding time. Like hungry kids reaching out to their moms, these elephants approach the overwhelmed visitors during feeding time. Innumerable trunks swoop and sniff all around for their daily dose of bananas, coconuts, watermelons etc. These gentle giants manage to swallow their first bite and reach out for a second round even before the feeders have the time to think of offering them the next round of treats. Some even reach out with their trunks into the empty food baskets to hoover up the very last morsel.

One of the most memorable personal man-to-beast experiences that await a tourist is a chance to scrub and wash an elephant at mud bath time.

Newcomers at the camps are often advised to keep a safe distance while feeding to avoid getting knocked over. The elephants here are allowed to roam freely, so they do as they please. When interacting with the elephants, always remember you’re there for them, not the other way around. Treat the animals with kindness and they will reciprocate with love — and possibly spurt on you with their trunks.

A word of caution for those who are eager to ride an elephant — sitting astride a massive nine-feet-tall, fourtonnes-heavy beast while lumbering your way through deep rivers and pristine jungles will be on every visitor’s mind, but remember, wild elephants need to be tamed before they can be ridden. As mentioned earlier, the taming process or phajaan in Southeast Asia is brutal. So if you want a cruelty-free experience then trekking elephants are best avoided.

Are you ready to be near these sociable, intelligent, emotional and majestic-yet-gentle giants? 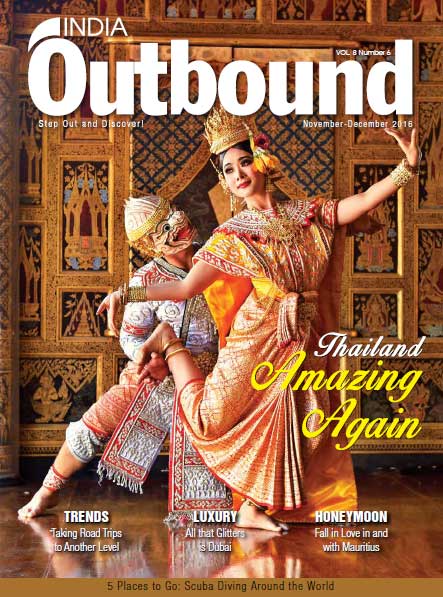 In this issue of India Outbound magazine closing the year 2016, we focus on a country in close proximity of India and one that has been a perennial favourite among Indians. Thailand offers a wide rang... Read more

Pokhara, an Oasis of Calm

Thrilling pursuits in the solitary hills

Exploring Nepalese Life With a Homestay in Panauti

Stories of passion made possible

Go Beyond Casinos and Neons 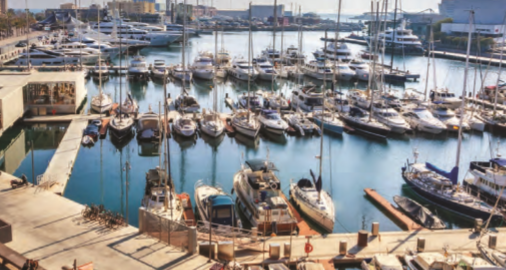 Wading Through the Heart of Catalonia

From Taipei to Taichung it's time to explore, its time for fun

Pokhara, an Oasis of Calm

Thrilling pursuits in the solitary hills

Exploring Nepalese Life With a Homestay in Panauti

Stories of passion made possible

Go Beyond Casinos and Neons