A Regal Rendezvous
in Patiala

The heritage walk in Patiala is an amalgamation of tradition and modernity, creating a unique experience for visitors. It encompasses magnificent forts, burnished arms and armours, shimmering chandeliers, European-style palatial buildings and a wide variety of traditional crafts to shop for.

First it was the thought of being in the state enriched with the most tempting cuisine and second was the extreme hunger, which made the hour-long journey from Rajpura railway station to Patiala really hard. With rumbling tummies, we headed straight to Patiala’s well-known eatery Pammi Purian Wala, famous for its chole puri (chickpeas with an unleavened deep- fried Indian bread) accompanied by an exclusive pethe ki sabzi (cooked pumpkin). The eatery, started by brothers Pammi Singh and Parinder Singh in 1983, also serves delicious Punjabi specialities such as samosa (crispy buttery pastry with potato filling) with a filling of paneer (cottage cheese) and peas and desi ghee pinni, a sweet made from flour, sugar and desi ghee (traditional clarified butter).

While the puri was being prepared, our guide Sarabjit Singh enriched our knowledge about Patiala, saying “Pati means ‘property’ in Sanskrit and Ala refers to Baba Ala Singh, the founder and first ruling chief of Patiala. In 1763, Baba Ala Singh laid the foundation of the Patiala fort known as Qila Mubarak, around which the present city of Patiala is built.” A historic city resplendent with architectural marvels and cultural heritage of the yore, Patiala is known for its hospitality too and I realised this when the waiter served us with hot puffed puri chole and with a glass of lassi (yogurt-based drink).

After the sumptuous breakfast, we started the heritage walk. On the way to Qila Mubarak, Sarabjit Singh informed us, “Patiala is a walled city comprised of nine gates. The first gate is named Darshani and serves as the main entrance of the Qila Mubarak. Other gates are called the Top Khana, Sunami, Lahouri, Samana, Nabha, Safabadi, Sheranwala, and the Sirhindi Gate.” He added that among the nine gates of the city the Shereanwala Gate had special significance since it served as a gateway to the civil secretariat during the erstwhile Patiala State, head office of the State Bank of Patiala, Baradari Garden, Sheesh Mahal, Moti Mahal and other offices.

Passing through one of the gates, we reached Qila Mubarak, the royal fort complex from 1764. Spread across 10 acre, it was home to the Royal Family of Patiala till the mid-19th century. A unique blend of Mughal and Rajasthani architecture, the complex comprises the Qila Androon (royal chambers), Ran Baas (guest houses), Darbar Hall (museum), living quarters of queens and several palatial buildings built under western influence like European Guest House. The complex has 10 courtyards along the north-south axis and each courtyard is unique in size and character. Each set of rooms in the Qila Androon makes a cluster around a courtyard and each bears a specific name. Just as one enters into the Qila, the world outside seems like a facade. The whole gateway is constructed with stucco work. Upper portion of this building was probably used by the king to direct over the functions performed in the court. The ornamental doors, carved European- style windows and chipping frescoes on the entrance gate’s ceiling elicit many a wide-eyed wonderment. The compound is marked by some cannons on display, and many small European-style buildings.

While Quila Androon displays elaborate mirror decorations, the Darbar Hall houses a collection of royal treasures such as a solid silver state carriage and a sword belonging to Persian emperor Nadir Shah who invaded India in 1739.

The highlight of this fort is the arms and chandeliers gallery, housed in the Darbar Hall. The Darbar Hall glitters with Belgian chandeliers and mirrors. There is an impressive armory on display and as well as a few vintage cars. It stands atop a mound on the right of Qila Androon Chowk, the open public space between the gateways of Qila Mubarak and Qila Androon. It is difficult to say which of the gallery’s collections is more impressive: the weapons or the chandeliers. If a seven-barrel bolt- action gun is ingenious, it is difficult to peel your eyes off the two tree-like Bohemian glass chandeliers. The 20 heavy chandeliers hanging from the ceiling can send you into a frenzy, but the stern royals (both Patiala and British, including King George, Queen Victoria, Queen Alexandra, Maharaja Mohinder Singh, Baba Ala Singh, Maharaja Yadvinder Singh, to name a few) staring down from their wall mounted frames demand decorum.

There is a story about how the chandeliers came to Patiala, Singh explained us. Maharaja Mohinder Singh (1852-76) was shopping in Kolkata, where he saw the chandeliers and enquired the price of one. The salesman snubbed him saying ordinary people could not afford them. At this, Mohinder Singh asked him to quote a sum for the entire collection and ship it to Patiala. Walking along the hall’s rear wall, you cannot fail to admire the four carved walnut wood doors. Spare a few minutes for the roof as well. It is a false ceiling, made of coloured wooden tiles. While it is difficult to pick a clear winner from the swords, lances, guns, armour and chandeliers, the silver alloy chariot used by Maharaja Bhupinder Singh, grandfather of the present scion (and former Punjab chief minister) Amarinder Singh, is a big hit with all visitors. The four-wheeled carriage was built in Kolkata in 1909 to be used on ceremonial occasions and was drawn by six horses.

The city of gardens

After having a complete dose of rich heritage, we headed to get the essence of beauty of the numerous gardens of the city. The old Moti Bagh is perhaps the most elegantly laid out garden in the city and it is also the setting of two brilliant palaces, namely Sheesh Mahal and Moti Bagh Palace. On the way, we pass Mohindra College, founded by Viceroy Lord Northbrook in 1875 during Maharaja Mohinder Singh’s reign. The college building shows none of the Mughal or Rajasthani influences that dominate Qila Mubarak. It is a Roman building.

We entered the Sheesh Mahal, which stands beside its dried up tank. Maharaja Narinder Singh had got this amazing palace built in 1847, at a cost of half a million rupees. Consider some of the palace’s highlights: a large tank that would require some effort to fill up in the dry season, a suspension bridge across the tank, modelled on Rishikesh’s Lakshman Jhula, two large ornamental watchtowers in the tank and cannons. Gardens laid out on the pattern of Lahore’s Shalimar Bagh, with fountains, terraces and water channels. As its name suggests, Sheesh Mahal had galleries decorated entirely with mirrors while other chambers were decorated with paintings in Rajasthani style. Today, however, its claim to fame is its museum of over 3,000 medals and decorations pieced together by Maharaja Bhupinder Singh from different corners of the world.

We proceeded to Moti Bagh palace, which has been recently painted and looks as good as new. While I can vouch for its beauty, there is one claim I couldn’t have verified even if I had spent one full day on the premises – that it has 1,000 rooms. Used today as a centre of the National Institute of Sports, the palace does not hold much interest for tourists, but its museum of sports certainly is an attraction. India’s first sprinter, Milkha Singh’s spikes, Gama Pehalwan’s millstone and Maharaja Bhupinder Singh’s silver bat are just some of the curiosities on display here.

We end our walk at the royal mausoleum, Shahi Samadhan, which contains the tomb—inlaid with intricate Islamic and Punjabi motifs—of Baba Ala Singh, who defended Patiala against the Mughals, Afghans and Marathas in the 18th century. White marble cenotaphs of other maharajas such as Karam Singh, Narinder Singh and Yadavindra Singh lie nearby. The latest addition is the samadhi of Inder Singh, son of Maharaja Bhupinder Singh, who breathed his last in February 2014.

Known for juttis (moccasins), paranda (hair accessory) and phulkari work (a tradition of handmade embroidery), shopping in the bazaars of Patiala is a pure delight! The market is a maze of fascinating shops selling local craft. There is a vibrant burst of colours as the local handicrafts, each more colourful than the other catch your eye. Patiala jutti is handcrafted footwear available in myriad colours and named after the places of their origin— Tilla, Lahori, Peshawari and Kasoori.

Traditionally, jutti were made of leather with embroidery in real gold and silver. They are now made of rubber soles in contemporary styles and designs. Also, paranda , the beautiful hair adornment, could be spotted in abundance at shops. These colourful silk tassels with added embellishments are customarily worn by Punjabi women on special occasions.

Clothes bedecked with Patiala’s phulkari work can be spotted in every second shop. The finest type of phulkari is bagh with such heavy embroidery that the base cloth is no longer visible. “It can easily take a couple of months to hand-embroider a metre of cloth with the bagh stitch,” a shopkeeper says. The work is executed using colours such as pink, blue and yellow in geometric and floral patterns, he adds.

With evening fast setting in, we decided to visit Dukh Nivaran Gurdwara, which was brimming with devouts. There was a sarovar (sacred pool) at the back catching the last rays of a setting sun, and shadows of pilgrims taking the parikrama (circumambulation of the pool). While enjoying the beautiful view and hearing scared hymns coming from inside Gurdwara premises, I instinctively began thinking that “If revisiting the past along with treating your senses is your cup of tea, you will truly savour the Patiala Heritage Walk”. 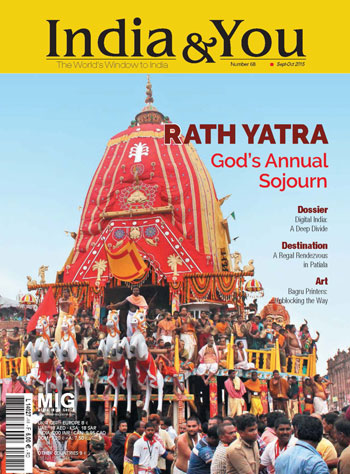 One of the biggest changes in the life of an Indian in the last few years has been the digital revolution which has made life much easier by providing a number of services which earlier were time con... Read more

A Look Behind the Silver Screen
Close