Bollywood emerging as a tool to promote destinations digitally

As filmmakers around the world are always on the outlook for exotic locations to set their films in, tourism boards and state governments are now eyeing this as an opportunity to promote tourism in lesser known locales in their regions. And what better than social media platforms to reach out to the masses?

There have been many instances where Bollywood solely had brought about remarkable changes in the tourism trends. From the movies in 1970s like ‘Kashmir ki Kali’ and ‘Aradhana’, to the recent ones like ‘Ye Jawaani Hai Deewani’ and ‘Befikre’ brought about prominent changes in the tourism industry in their respective locations. City theme based movies like ‘Delhi-6’, ‘Kahaani’ (Kolkata), Kai Po Che (Ahmedabad) have also influenced the demand of holiday packages for the respective cities.

Bollywood has become an integral part of Indian culture and touches the life of every Indian. Looking at the win-win opportunity that it offers, the tourism boards, therefore, are easing the process of shooting films in such locations and are switching to social media platforms to promote their destinations through Hindi cinema.

Social media has always been the crux of promotion and lately, Bollywood and tourism boards have made it the hotspot for popularising films and thus the destinations in the frames.

In a recent development, Kerala Tourism is all set to launch 360 degree videos featuring six selected destinations in the state, in order to give a major boost to its online viewership.

These short-duration virtual reality videos will represent the ‘God’s Own Country’ for the first time on YouTube’s dedicated channel for such immersive videos, which currently has more than 1.82 million subscribers across the globe, covering destinations like Bekal, Alappuzha, Athirapally , Thekkady , Pookkode Lake and Thalassery Fort in the state.

The 1-2 minutes videos will also cover nearby attractions and popular art forms, giving better contextual information than a series of static images or a linear video clip could provide, as proposed by the department.

Not only Indian tourism boards but international governments are also leaning towards Bollywood and social media to promote tourism.

Recently, to popularise France as a tourist destination among Indians, Lido de Paris, Bateaux Parisiens and Atout France collaborated with Media India Group and Asiacom to promote French destinations in the Bollywood flick, ‘Befikre’, entirely shot in France, where the Lido dancers shared their shooting experiences in Lido de Paris, Bateaux Parisiens, Champs Elysées and the rest of France in an exclusive interview for the Sodexo Group, which was aired on YouTube and also promoted on social media platforms like Instagram, Facebook and Twitter.

The young population is glued to social platforms and it benefits the filmmakers to announce and share details of their movies online instead of engaging offline with a limited number of fans. It is more widespread and also economical.

Apart from promoting destinations, directors and actors are also promoting the theme of their films through these social podiums.

In a similar bid, Aamir Khan took to live chatting on Facebook with his fans about his film ‘3 Idiots’ and Amitabh Bachchan even played card games online to promote his film ‘Teen Patti’.

However, the highest grossing film of the year – Sultan, took the social media promotions to a whole new level. The team launched their own official website – www.sultanmovie.com, to publish movie’s first look, official trailers, songs, photos, videos, shooting details, related news, interviews, and much more. They also created a separate Twitter account with the name – SultantheMovie and a Facebook page with the same name.

Making use of the selfie trend, the cast of ‘Dilwaale’ posed with half faces covered and posted it as first look of Dilwale on Twitter. Soon ‘half selfies’ became the trend on social media, owing its start to the film’s poster.

Many other Bollywood films have used videos and pictures as a promotion technique on Instagram and Twitter, and witnessing the huge impact it creates among the masses, production houses are increasing their budgets for social media spending. While before online marketing budgets were restricted to 5-10 pc of the entire spend, now they are up to or even more than 20 pc in some cases.

5 unconventional Bollywood films of 2016 worth watching

Raising a toast to the Parisian spirit

The rising trend of digital transactions in India

Find the best deal and explore!

A quick guide for the tenderfoot

Holiday campaigns to watch out for 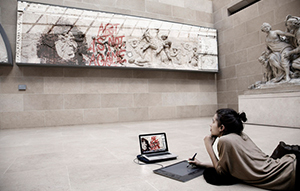 Confluence of technology and art