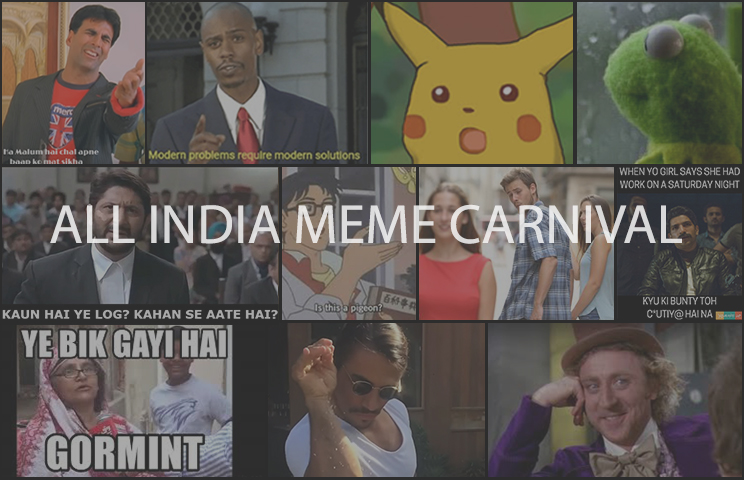 Memes, the digitalised version of comic strips are no longer just a recreational tool, but have evolved as a powerful business tool, propaganda instruments, electoral tool, a platform for communication and a space for self-reflection!

Flooded on the screen are numerous images and/or clippings with quirky small texts, spread all over the newsfeed, that will set you on a humorous trail. Welcome to the all India meme carnival. As social media has become a way of life in India, there has been a rise in another digital revolution- internet memes. The traditional meaning of memes, that refers to them as small units of culture that spread from person to person by copying or imitation, is concurrent with the digitalised version which describes them as humorous images or videos that are copied and spread rapidly by Internet users. Over time, the memes have evolved not only in terms of creativity but popularity too. Started initially as humorous pieces, the memes are no longer just the digitalised version of comic strips but have emerged as a powerful business tool, propaganda instruments, electoral tool, a platform for communication and a space for self-reflection. They have got people arrested and sued. Once shared just as a hilarious graphic, the memes have now carved a niche for themselves in the virtual world.

Though the West was already enjoying its fair share of memes, it was 2006 that marked their entry to India. While some of the memes re-created a scene or character from books, films or real life, some had meme characters tailored especially for the meme, Kermit frog being one of them. Indian society began getting used to this virtual company of memes. Content of the memes began to be  tailored in such a manner that a large audience could relate to it. With this strategy, the memes about daily-life experiences, the instances from one’s childhood and inner feelings came into the picture. One of the first few meme-makers in India to achieve fandom and success was Rajnikanth v/s CID Jokes, a social media account by three friends who began this meme trail by sharing plain hilarious content related to Rajnikanth (an Indian film actor) and CID (a super hit Indian television detective show). The page became so popular that its followers crossed a million. As the popularity of these memes increased manifold amongst the netizens, meme-makers started experimenting with the content. Many memes started incorporating intense human emotions that could create a dialogue with the user. Memes about relationships and/or childhood traumas started emerging. Thousands of people started reacting and/or commenting on the memes. The social media painted a contrasting image of itself by acting as a comforting escape and a source of self-doubt at the same time.

“Whenever I read a meme or a quote and I can relate to it, it’s oddly satisfying. I mean it kind of boosts my self-esteem. Of course, they are a source of seeking external validation!” says Rashi, a 15-year-old from Delhi.

Each meme has its own psychological impact on the users. One of the most debated meme categories influencing mindsets are the ones that talk about mental health. The memes of this type, for sure, help in increasing awareness about the mental health issues but many blame these memes for romanticising and normalising conditions like depression or social anxiety.

“I think not always, but many a time, the psychology-related memes add on to the trail of pseudo-psychology prevalent in our society. Like, the internet is full of memes related to depression that now almost everyone is aware of, but not many understand the meaning. For them, it has become a fashion statement. The very idea of depression has become a coolness quotient amongst the youth,” says Divya Bhanot, a psychology teacher.

Similarly, the idea of seeking external validation can act the opposite way by disappointing the users. Like a meme mocking a particular personality type can discourage many.

The political and communal memes play a special role in influencing the public. Some of the meme-makers even had to face legal trouble for sharing controversial content. Earlier this year, the BJP worker active in Kolkata, Priyanka Sharma was put behind the bars for sharing a meme on social media that mocked the chief minister of West Bengal, Mamata Banerjee. Sharma further shared that she was tortured in prison and was forced to write an apology letter.

Many government portals, as well as NGOs, even use these memes for generating awareness. Earlier this year, the Kerala Police social media crossed 1 million followers due to the creative memes that helped in creating awareness about certain issues in a humorous fashion.

‘Welcome to the real world!’ This is definitely not what friends are for and if they are, they aren’t your friends at all #HoshMeinAao pic.twitter.com/0GJb2AlKMA

Memes also act as the seeds of change. Presenting before the audience the political, social as well as economic facts, similar to the newspaper cartoon strips, have gained popularity. The social media is full of memes talking about class discrimination, the social and political theories and current national as well as international events.

A new marketing strategy adopted by the social media platforms, that has been a super hit amongst the users is tagging. While earlier one needed to download and then share the meme with another person, now the social media platforms have brought the ease of sharing a meme merely by writing his/her name in the comment section. Many considered tagging as a way of communicating with their knowns.

“For me tagging someone is reminding them how much I love and cherish them. It’s cute when someone tags me, this means they were thinking about me,” says Natasha Agarwal, a student from Hyderabad.

The tagging increases the engagement on the post, profiting the owner. When two Facebook users tag each other, the post automatically starts appearing in the feeds of mutual friends, thus increasing the reach. While many are in favour of this, many consider this as a breach of privacy.

From memes to riches

Roses are red, Violets are blue. Garbage is dumped and so are you. pic.twitter.com/NIfI1gZlhF

Memes have turned out to be an excellent marketing tool. Many brands have incorporated this meme approach to increase their presence amongst the users. Some of them are using memes as an advertising and marketing tool. Many applications have now even started paying the meme-makers for creating these little bundles of recreation, Meme Chat being one of them. With the monetary benefit associated with the meme-business, some have even adopted this as a career and are earning from the meme-pages they run on social media. Sometimes the brands collaborate with each other and indulge in making combined memes which fetch publicity for both the brands. Many TV shows and films too, get an added share of publicity and advertising via memes. One of the best examples of this is the string of memes that flooded the Indian social media after the first season of  Sacred Games, an Indian television show that helped in increasing the popularity of the show massively.

“No doubt the memes help in the publicity of the films or shows, but it’s a two-way process. Often the show or film is already such a hit amongst the audience, that in fact, it helps in driving the memes. They don’t depend on the memes for the publicity, rather provide the meme-makers with rich content,” says Chandan Gupta, a digital marketing executive from Delhi.

The memes are thus no longer digitalised comic strips, they have evolved to don multiple avatars!