Climate change and biodiversity
Yet another alarm bell goes unheard!

Human greed threatens over a million species of life with extinction as rush for profits trumps preservation.

The roll of bad news on environment seems to be unending. Practically, every month, some report or another, sounds alarm on yet another aspect of human actions, driven almost entirely by greed rather than need, that is threatening the future of life on the Earth.

The latest such alarm was sounded recently in Paris when a group of experts that had studied the impact of human actions on biodiversity across the globe concluded that over a million species of various forms of life, wild or domestic, in air, water or on the land, large or small, were threatened by extinction due to human activity, either directly or indirectly.

The report was compiled by over 450 experts from 109 nations, who studied nearly 15,000 documents, covering all forms of life on the earth. It says that incessant deforestation to make way for agriculture, industry, cities or other infrastructure has reduced the natural habitat of many species by as much as 75 pc. The scenario is no better in the oceans and other water bodies where nearly 66 pc of habitat has been lost. But the biggest loss has been seen in wetlands that have been decimated by upto 85 pc. Rising pollution, with the release of upto 400 million tonnes of toxic wastes in the global water bodies, is also one of the key factors that could push the species towards extinction.

To add to these, climate change, again induced by human activity, has aggravated the situation for most species, which are struggling to overcome loss of habitat, are unable to cope with the altered climate, which often disturbs the delicate balance that the nature has maintained between various life forms. This has led to an acceleration of the rate of extinction of species, the experts said.

One of the most worrying aspects of the report is that most of the activities like urbanisation, infrastructure development as well as clearing of forests for farming and industrialisation is now mainly taking place in developing countries, many of which are tropical and hence reservoirs of the remaining biodiversity in the world. Be it the Amazonian forests or the jungles of South East Asia or sub-Saharan Africa, or indeed the Himalayas, most of them bear an increasing number of scars due to impact of destruction of biodiversity.

Alarming as it may have been, the report seems to have fallen on deaf ears, at least in the corridors of power and is unlikely to make the kind of impact on current set of leaders which is needed for the governments to shed their indifference and nonchalance towards the way humans are causing damage to the planet and all life forms, including themselves.

One exception was France, which hosted the release of the report and almost immediately, President Emannuel Macron said that he would review the budgets to ensure that France initiates measures to preserve biodiversity, by reducing loss of farmland or forests to construction, cutting down chemical pesticide consumption as well as by augmenting the size of protected marine areas.

Most of the other governments have limited their reactions to platitudes, expressing concerns about the need for protection of the planet Earth. On the ground, little is likely to change as the battle between mindless ‘development’ achieved through rapid, unplanned urbanisation, increasingly intensive farming or livestock production, as well as the continued rise in polluting industries or mining.

Schism between developing and developed nations

The issue will once again drive the schism between the developing and developed nations as the former are likely to face immense pressure to change their priorities as most of the global biodiversity now remains limited only to the developing countries. The leaders of these countries as well the businesses point at the greater need for industrialisation or mining as well as farming in order to create jobs and also raise the quality of life of their citizens.

The developed nations do stand guilty of double standards on these issues as they fail to offer any alternative path of development or even the much needed financial and technical assistance which would allow the developing countries to preserve the last remnants of Nature, while ensuring that their growing populations have adequate to eat and live with.

In addition, most of the so-called development around the world is being carried out by western companies that generate billions of dollars of profits each year through exploitation and over-exploitation of the scarce natural resources in the developing nations. Be it oil, mining, construction, automotive, aviation, chemical or practically any other industry, western MNCs constitute an overwhelming proportion of companies engaged in these businesses and hence  responsible, in large part, for the destruction of the environment.

Unfortunately, as has been with several other reports and experts’ predictions, this issue, too, is likely to be buried soon as the global attention shifts to yet another alarm or crisis. Some, notably the US President Donald Trump, would see the recommendations as being anti-American, while developing country leaders are likely to point fingers at their counterparts from the developed nations.

In the meanwhile, amidst the blame game, the Earth would continue to hurtle towards yet another catastrophe.

One thought on “Climate change and biodiversity” 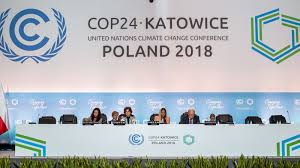 Looking back at COP24

Takeaways from the climate change talk