India’s sherpa to G7, Suresh Prabhu, says that India has made unparalleled progress in empowering the masses digitally and India can help other countries bridge their digital divides.

At the ongoing G7 Summit meet here in Biarritz, India is likely to showcase the success of Digital India, one of the flagship programmes launched by Prime Minister Narendra Modi.

‘‘The kind of progress that we have made in the use of digital technology notably digital economy in improving the lives of hundreds of millions of common Indians is unmatched and unprecedented. Even the poorest sections of the population now receive their government benefits directly in their bank account and they can use the money without ever going to a bank. The rapid growth of the digital economy in India is indeed something that can be shared with other countries in order to help them replicate the Indian experience,’’ Suresh Prabhu, India’s sherpa to the G7, told Media India Group in an exclusive interview today in Biarritz.

The southwestern French beach destination, that has been favoured by European royal families for centuries, is hosting the G7 meet that opened yesterday with the arrival of heads of government of the seven largest economies in the world. Prabhu says that besides digital economy and empowerment, there are other issues where India has made a meaningful contribution and can help other countries, notably developing nations. ‘‘Biodiversity is a major issue here and in this India has already made a major contribution. We have historically been a country with a high level of biodiversity, which has only increased in the recent years as can be seen from the increase in our forest cover as well as the jump in the number of tigers in the country. As the tiger sits atop the food chain, an increase in number of tigers means that biodiversity is not only healthy, but actually increasing. Also, on the issue of climate change, India has already made rapid progress. We have set and are firmly enroute to meeting very ambitious changes in our energy mix, with the addition of 100,000 megawatt of solar energy and 75,000 megawatt of wind energy. We have also created the International Solar Alliance, along with France, through which we are assisting other tropical countries move towards adopting solar energy,’’ Prabhu told MIG.

Another key subject here at G7 is the rising inequality in the world. Prabhu says that the last few decades have seen a sharp rise in inequality across the whole world and it seems to be rising incessantly. ‘‘There is growing inequality between the countries and even within the countries. There are all kinds of inequality – economic, social, gender and digital. We also face the challenge of inequality, but are trying to address it through various social inclusion schemes of the government – such as direct benefit transfer, programmes to double the income of our farmers, which incidentally, account for nearly two-thirds of our entire population. We are also empowering our women and especially the girl child through various innovative schemes,’’ Prabhu says.

Another area where India could stand out as a singular success is the issue of democracy, Prabhu says. ‘‘India is not only the world’s largest democracy, but is a thriving and vibrant one and while some countries have seen the democracies at highs and lows and some have seen the death of democracy in their systems, we have a flourishing democracy, at every level – from the village right upto the national level,’’ he adds.

Tiff over French tech tax may climax at G7 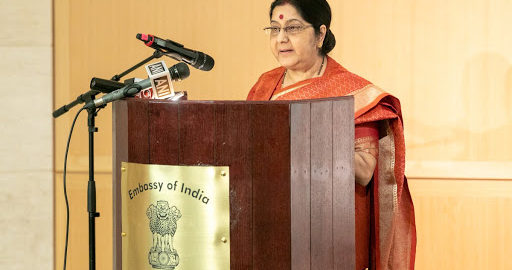 India and France are in a new phase of their relationship