After years of remaining underground, hip-hop has finally emerged from the shadows and talented young artists use the music to denounce social inequalities, injustices, and conservatism in the Indian society.

It was a bold bet but filmmaker Zoya Akhtar took it and won it. The director had also made Luck by Chance, a film that traces the course of an aspiring actor landing in Bollywood, and for which she received the best prize for directorial debut at the 2009 Filmfare Awards.

Her new film, Gully Boy again highlights the rise of an artist. It offers the public a film dedicated to the life and work of one of the icons of rap in India, Vivian Fernandes, aka Divine. Gully Boy has been one of the biggest hits of the beginning of this year with the box office tills collecting nearly USD 5 million in the first two days itself.

The performances of the main actors, Alia Bhatt and Ranveer Singh, received favourable international acclaim with a nomination at the Berlin International Film Festival and also a congratulation from American actor Will Smith. The film’s slogan, Apna Time Ayega (Our time will come) is already on the t-shirts of fans and sounds like a cry to finally bring rap to the forefront of the Indian music scene. Does the craze for a film that retraces the life and career of an Indian rapper announce the formal arrival of rap in the music repertoire of Indian cinema? Nearly 17 years after the release of 8 Mile, a film about the life and success of American rapper Eminem, is Divine the tree that hides in the forest of Indian hip-hop?

Zoya Akhtar has, through her film, transmitted her enthusiasm for the hip-hop scene to many spectators. But, the link between the rap scene, Indian hip-hop and Bollywood is not as recent as that. Attempts to merge had already begun in the 1990s.

The first desi (belonging to the Indian subcontinent) rapper Baba Sehgal had launched himself on the scene with Thanda Thanda Pani, deeply inspired from Vanilla Ice’s title Ice Ice Baby. The album went on to sell 100,000 copies in three weeks and 5 million in total. Sehgal’s gamble to bring hip-hop to India at a time when the local music industry was still overwhelmingly dominated by film music, paid off immediately and he got offers from various film producers for collaboration for films such as Hum Hain Bemisaal (1994). He also directed music for the 1995 film Dance Party, Nalaik in 2005 and Bhoot Uncle in 2006. Sehgal would have had other films, but perhaps the society and even the youth were not yet fully ready for this genre of music. ‘‘I’m not for Bollywood. Bollywood never got along with me. It has always been a little scary and not very secure for me,’’ Baba Seghal had told a newspaper in an interview.

After a stint in New York between 2001 and 2005, he returned to Mumbai and signed another of his hit albums, Welcome to Mumbai. But, it was destined to be the last such success for him. The indipop independent scene, as it was nicknamed, began to run out of steam at the beginning of the millennium. Bollywood will set the tone for hit songs. All the great indipop artists of the time have practically disappeared today. They gave way to artists, some of them with sulphurous messages, taken up by Bollywood, others for more demanding and definitely more committed messages.

The great figures of desi hip-hop

As for male artists, the mainstays of the hip-hop movement are Bohemia, Yo Yo Honey Singh, Divine or Naezy. The term ‘desi hip-hop’ includes artists from the Indian subcontinent. The term was coined by Bohemia, an American artist of Pakistani origin. Born in Karachi, he moved to California at the age of 13. Associated with hip-hop, producer Sha One was behind the popularisation of Punjabi rap in the United States and the Indian subcontinent. His first album Vich Pardesan De (In the Midst of Foreigners, 2002) is ranked amongst the top ten albums of the BBC UK. Da Rap Star, his third album, received four nominations for the UK Asian Music Awards and the PTC Punjabi Music Awards. His style is close to American rappers: big cars, gang life, and punchlines in Punjabi scooped up dollops by his fans. His biggest success, the song Ek Tera Pyar got over 18 million views on Youtube. Spotting an opportunity, Bollywood producers lined up with offers to him including films like Chandni Chowk to China and 8×10 Tasveer. Bohemia also became the first rapper to appear on the popular Coke Studio music show.

Closer home, Yo Yo Honey Singh has been extremely successful. Born in a Sikh family, in Punjab, Hirdesh Singh, who adopted the name Yo Yo Honey Singh, began his stint with Bollywood when he produced music for Shakal Pe Mat Ja (2011). Success was immediate. The same year, his Punjabi album, International Villager, topped the BBC Asian music charts. Angreji Beat, a number from this album was such a hit that it was replayed in Cocktail, a film starring Saif Ali Khan, a leading actor in Bollywood.

His songs replicate the tried and tested elements of all modern rap and Banknotes, big cars, tall girls, and practically uninterrupted product placements. Yo Yo created controversy with some misogynistic lyrics that seemed to praise violence against women, leading to the cancellation of one of his concerts for the new year 2013 at a leading hotel near New Delhi. On another occasion, his song Party All Night from the movie Boss, starring Akshay Kumar, lead to a case being filed against him in the courts for vulgarity.

In contrast, the artists, Divine and his acolyte Naezy, the inspirations behind the film Gully Boy, produce more engaging lyrics, taken from their own lives. Influenced by the American rappers Nas and Eminem, the latter was also part of the collective, Mumbai’s Finest Crew, teamed up with Naezy in 2015. They together signed the title that will propel their career, Meri Gully Mein. Their lyrics evoked everyday life, the harshness of life in Mumbai, politics and especially the poverty of shanty towns. The fact of flying to London for several performances does not seem to have prevented the 25-year-old rapper from continuing to live in the same slum where he grew up, in Andheri, northwest Mumbai.

For a society where women are still largely cast in stereotypes, it is surprising to see the number of extremely successful women rappers. The scene is prolific and the list long. Hard Kaur, Raja Kumari, Ish Kaur and Dee MC lead the game.

Long before her male acolytes, Hard Kaur made a name for herself in 2007 with her album Supawoman. The British artist of Indian origin demonstrated her talent by churning out consecutively successful albums. With her debut album staying in the top 10 of the Indian music charts for many weeks, she was soon mobbed by some of the biggest producers of Bollywood, who wanted to add her unique lyrical and poetic style to their films. Daughter of an Indian immigrant who fled India after domestic violence, she was mocked at school in the UK because of her accent. ‘‘I preferred to hang out with the Black classmates because they loved me for what I was and they did not judge me because I was from India,’’ she told a magazine. Hard Kaur says her lyrics are all drawn from her own real-life experiences.

Another queen of desi rap, Raja Kumari, also grew up outside India. Born in 1986 in Clairmont, California, the multi-talented artist, with a degree in Asian religions and a trained Indian classical dancer, discovered hip-hop with the album The Score des Fugees. Her hit song, Shook, earned instant international fame for her. She says she was inspired, in her musical style, by the famous Oscar-winning composer A R Rahman. She recently co-wrote and co-performed two hit titles with Divine, Roots and City Slums. Both went on to break the charts on YouTube, with 6 million and 16 million views, respectively.

At home, female rap icon in New Delhi is Ish Kaur and in Mumbai, it is Dee MC. Ish Kaur has already won awards as the youngest Indian rapper.

She writes her lyrics in Punjabi, English and Hindi and talks about her life and her hopes of breaking the taboos and constraints of Indian society. Dee MC, with a faster flow, also denounces the conservatism of Indian society and how women are forced to conform to norms laid down by the males.

The wave of rap sweeps across India

In addition to these great figures of the genre, a multitude of artists has spread to all parts of India. After 2011, interest in rap has gradually increased and so has Bollywood’s tendency to exploit the talent of these artists. The genre has reached a certain maturity and seems to have consolidated its position in the collective consciousness of music lovers. Delhi and Mumbai set the bar high, with the 2 ShadeZ and Desi Beam bands for Delhi, Mumbai’s Finest and Bombay Bassment for Mumbai.

The Delhi bands seem to shout out loud their ‘gangsta’ aspect and mix words in English, Hindi, and Punjabi. Desi Beam quickly reached a national reputation to the point that the master, Bohemia, did them the honour of featuring on the piece Bandookan. The slum gods of Mumbai rely on the issues of the city and its denizens. For the Mumbai’s Finest side, the lyrics denounce social injustices and endemic poverty. Bombay Bassment, whose singer, Bobkat (Robert Omulo) is Kenyan, calls himself a hip-hop band, but their funk and reggae influences rank them apart. The sound is more colourful, lighter, the texts evoke themes and lighter moods, including romance.

Beyond these two megacities, there is a lot of talent in other cities of India, notably in the south, with groups such as Machas with Attitude, a trio composed of Smokey, Brodha V (Bengaluru) and Bigg Nikk (Chennai) and the pioneers of Tamil hip-hop Tamil Tamizha (Tamil Nadu) or the unmissable Street Academics in Kerala. The Bengaluru group not only raps in English but also in Hindi, Telugu, Kannada, Tamil, and Malayalam. Their old school music reminds fans of the genre of rappers in the late 1990s. For Tamizha, its links with the film industry are clear and the group offers its audience Kollywood friendly hits.

The north-East, with Assam and Meghalaya, is not far behind in the scene, with numerous extremely talented groups such as Assam Cypher the Khasi Bloodz. The sound is chiselled, with a mix of bass and uses typical instruments such as shehnai, an Indian oboe, as well as modern ones like synthesisers. The clips are worked. The rhymes follow each other at an impressive pace and leave the listeners speechless. The messages, delivered in local languages and in English, the social injustices inflicted upon the local populations.

It took the tremendous success of the film, Gully Boy, to put the spotlight on the way that had taken deep roots across India. The fans are numerous and the rap sounds like a welcome cry for a generation caught in the fires of a sometimes restrictive conservatism. Yet, the battles are many and far from won, hence hip-hop artists can continue to belt out many more hits. 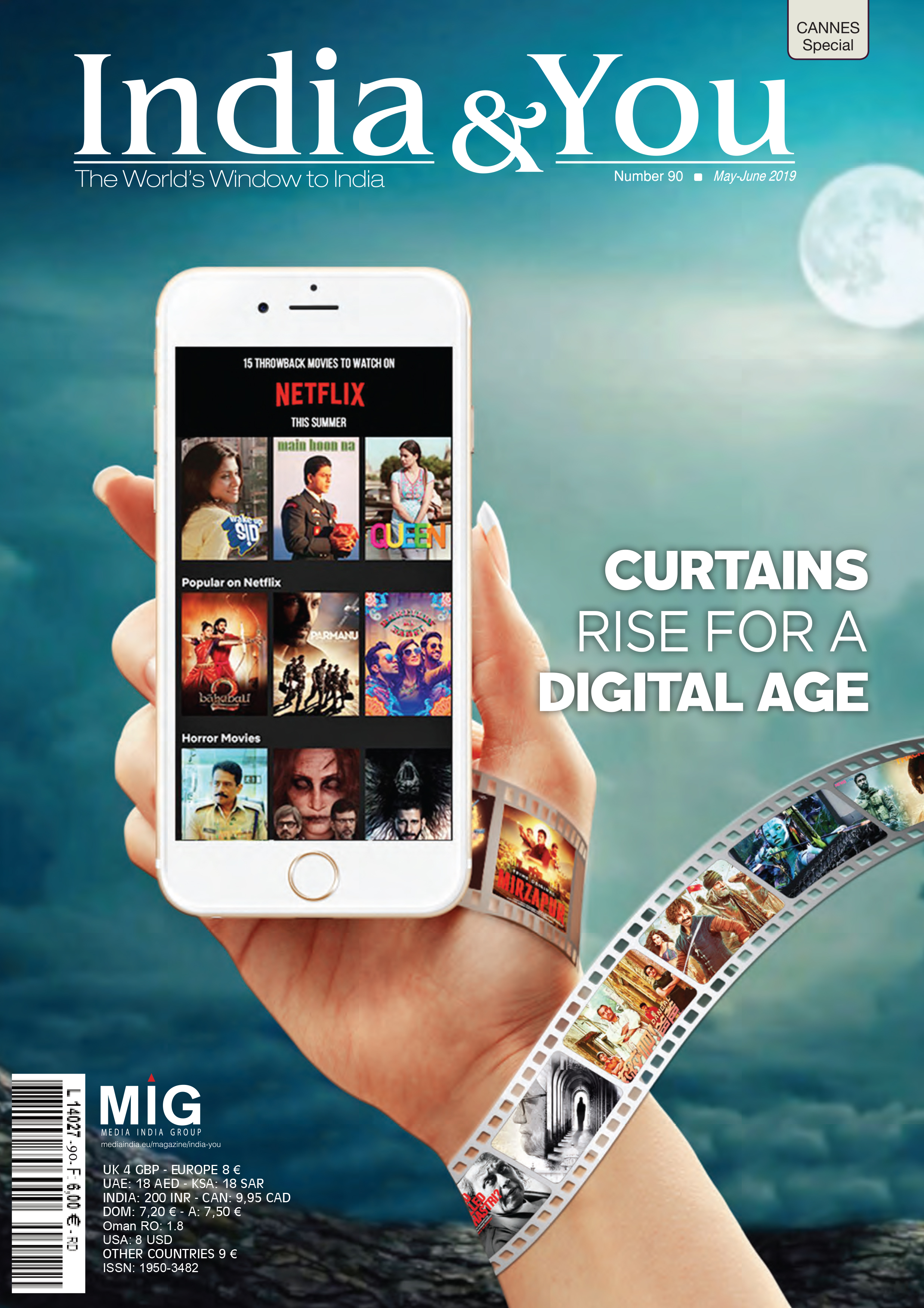 With the drums rolling for the 72nd Cannes Film Festival, the world is ready to witness the extravaganza of the cinematic art form in all its glory. In this issue of India & You we bring you inter... Read more

Pop, short for popular music originated in neighbourhoods across the US