India relies heavily on conventional energy sources, coal being at the forefront and the scenario seems to continue in the coming decades as well in order to feed one of the fastest growing economies, despite an ambitious push for renewable energy. Meanwhile, quick steps become indispensable to limit ecological damage at production, transmission and consumption levels.

Fumes, fumes and again fumes… The Indian energy landscape is still a smoggy one, despite a push for renewable energy announced by the Modi government before the Paris international conference on climate change, COP21 in December 2015. By 2022, India is committed to develop 175 gigawatts of renewable energy, of which 100 gigawatts is coming from solar energy alone. But beyond these figures, which are deemed ambitious by experts, the shift of balance towards renewable sources will not be an overnight story. If we leave aside the case of a pioneer state like Gujarat, rooftop solar facilities in most big cities have just started to appear. In Delhi and the emblematic NCR (National Capital Region), one sees solar rooftops mainly on government buildings or on metro station facilities. Only recently, the individual houses have been given the opportunity to engage in a virtuous circle, where you produce your own energy from solar panels and sell the extra to the grid.

Have we ever wondered why does the sky remain so dark yet? The reason is that India is growing fast and has huge, escalating energy needs and that it still relies heavily on conventional fossil energy. According to official statistics, fossil energy sources – coal, oil and natural gas – still account for more than 90 pc of India’s energy needs. The largest chunk of it is coal (more than half of the total), then oil (more than a quarter) and then natural gas (less than a tenth). Renewable sources of energy such as hydro, biomass, biofuel, waste, solar and wind are still way behind in this mix, with less than a tenth of the total.

One of the hard realities behind it is that India has the fifth largest coal reserves (more than 6 pc) on the planet and it is also the fifth largest coal producer (around 6 pc of world production). Coal, which is now considered an energy source of another century, still accounts for more than 70 pc of the electricity production. It remains attractive and relatively cheap, since it is in abundance and easily exploitable.

India has the ambition to change this narrative. By 2030, it intends to reach a symbolic level of generating 40 pc of its installed electric power capacity from renewable energy sources. It also aims to reduce its carbon intensity by a third as compared to what it was in 2005.

However, there is a big catch in this new plot, which rather seems ideal. Even if the proportion of fossil fuels in the total energy mix decreases, its share volume will still escalate, in an economy growing at more than 7 pc annually. And India will not only produce more fossil energy but it will also import them in a proportion it never did before. By 2035, India’s natural gas imports, oil imports and coal imports will skyrocket to around 573 pc, 169 pc and 85 pc respectively, according to BP’s World Energy Outlook.

Because of this huge appetite for fossil fuels, India has no choice but to implement quickly the least harmful solutions to minimise the ecological damage of conventional energy sources in production, transmission and consumption areas. When the transitional period is unsteady, it is the only sustainable path to take to reach a more balanced energy mix.

In the coal production sector, India first has to shift to cleaner and more modern units. But this will take time and will be costly as it requires advanced technology and expertise.

“Indian government has taken steps to go for cleaner coal production units. By 2016-2017, the goal is to shift to new generation units, called ‘supercritical’ that reduce pollution emissions by 25-30 pc but will also increase the cost by 30 pc. The shift to even more eco-friendly ‘ultrasupercritical’ facilities is also a target but has still to be designed”, says Probal Ghosh, senior research analyst at Delhi based think tank Integrated Research and Action for Development (IRADE).

In fact there are many drastic technological solutions to reduce the pollution levels but they are all very expensive. For instance, carbon capture from fossil fuel power plants and its transportation and storage in an underground geological site is a very efficient process, as it prevents CO2 waste to go in the atmosphere but it requires a whole new infrastructure.

All these new steps also require technological transfers from foreign companies. It would have many positive aspects attached to it – it will boost favourably the ‘Make in India’ drive and help to better position the country in the strategic race for competitive green energy industries. “Transfers of technologies from countries like Poland, which has a great experience in coal production, can speed up processes for sure,” says Agnieszka Wasilewska-Semail, President of Rafako, a Polish power sector company, who took part in the Second India-Central Europe Business Forum organised last September in Bangalore.

“We are a company that operates around 40 installations of conventional energy across India, mainly coal units. Some of them are relatively new, some relatively aging. They need rehabilitation in order to serve for the next 30 years and of course to be more efficient. We are open to train engineers from India and show them how to operate new plants. The aspect of servicing the plants optimally for number of years is very important. It won’t be possible out of Poland,” she adds.

All these rehabilitation and innovation processes make fossil energy production more costly. But it could be a possible solution to environmental problems. It makes it even more necessary, from a cost perspective, to shift drastically to renewable energy sources, which are comparatively more affordable.

“From an economist point of view, the new process of coal auctioning after the coal scam cases is also important because it makes coal more costly, which is an advantage for renewable sources that are then more competitive,” explains Probal Ghosh, from IRADE.

In the petrol and gas sectors also, the government has sent new signals to companies and consumers to curb their demand, since market rates have gone up. But some more steps have to be taken, with notably more stringent pollution standards.

“In India, the entire energy sector is heavily subsidised and there is a lot of popular demand for it, especially among the poor, as the success of the Aam Aadmi Party (AAP) in Delhi elections, elected notably on its promise to deliver cheaper electricity, proves it. One of the main problems is that power companies do not necessarily have enough room to invest as much as needed in the maintenance and development of transmission and distribution of electricity, confronted with aging networks. There should be a rationalisation of the electricity policy to make it possible to address this problem fully,” says Ghosh. Another solution is to develop offgrid electricity with a decentralised approach – this will help in reducing electricity losses from the main grid and would also curtail unnecessary extra consumption. It would also use very less polluting diesel generators in case of power cuts. But to develop the off-grid part effectively, the whole system has to rely more on renewable sources of energy. This would require investing heavily in new facilities and mini-grids, for villages for instance. Here also, cost remains the key aspect of the problem.

Solutions are there to reduce the consumption of fossil fuels. Smart grids and smart electricity meters at home have been in the pipeline to keep a check on the consumption levels. New LED and CFL bulbs, much less greedy in electricity, have been heavily promoted by public authorities and their demand do picks up, even in villages.

Now even appliances have mandatory star ratings in terms of energy efficiency, to make people conscious of cost differentials in terms of long term maintenance. One can now compare the real cost in a five year period of a five star fridge with the heavier electricity consumption of a fridge with less number of stars.

Useful as it may be, all these initiatives might still not curb enough consumption levels of fossil fuels in a society hungry for modern comfort and new devices.

“In terms of energy consumption we have to adopt a reverse approach. Instead of focussing exclusively on improving efficiency of consumption, we need to first device solutions to reduce consumption and then efficiently consume the rest. For instance, design prudent buildings from the very start, should have less glass windows, better insulation, solar energy on the roof, instead of reducing the consumption levels of the building later by changing appliances, and boasting we have reached a certain ecological standard. That standard could have been reached or overreached during the construction process itself. We have to change the consumption patterns and priorities, otherwise our climate change strategy will be very weak,” says Vivek Chattopadhyaya, deputy coordinator of Air Pollution Control Unit at Centre for Science and Environment (CSE), in Delhi.

On the industrial front, which is a key part of the equation, government gives incentives to reduce the energy consumption levels under the ‘Perform Achieve Trade’ (PAT) scheme. But then again, a more drastic and fundamental approach is equally needed.

“The National Green Tribunal (NGT), an environmental court, which was set up by an Act of Parliament in 2010, is a game changer by commanding the jurisprudence evolved by the Apex court of India in dealing with several land mark cases. The Right to live in a non- polluted environment, declared one of the fundamental rights as enshrined in the constitution of India, and also the ‘polluter pays principle’ – including the declaration that the natural resources are no more property of any individual or of the Government: they are only the trustees of the natural resources such as lakes, rivers, mountains, hills – have been well defined and validated by the Apex court,” says Om Prakash, lawyer before the Green Tribunal, based in New Delhi.

Polluters, notably some heavy industry factories and fossil fuel producers who do not respect environmental standards, have to restore the status of a polluted area as it was earlier. They can be heavily fined and have to respect time constraints to put into action the Green Tribunal decision.

This is a new radical approach where the thirst for fossil fuels has to be curbed in order to not damage the environment. For many players, it is still a Copernican revolution that has to be fully implemented – to coincide with ecological imperatives and realities, for the only planet we have to live on. 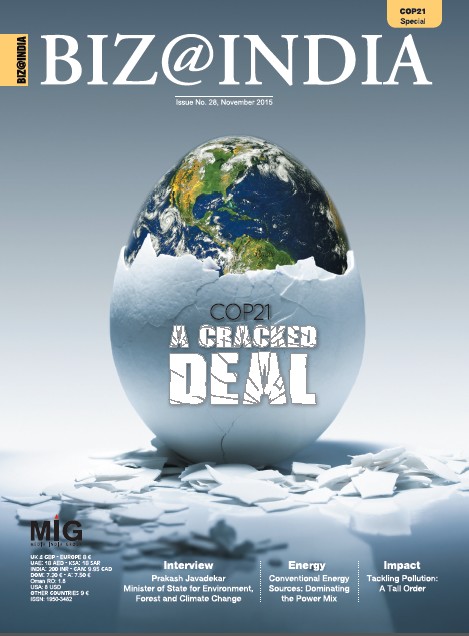 In the times when climate change and global warming have become the termites for the entire globe, eating it away slowly and gradually, 21st Conference of Parties (COP21) ... Read more

Cooling the Hot and Crowded World

Air conditioners lead to the ‘hot future of cooling’

Cooling the Hot and Crowded World

Air conditioners lead to the ‘hot future of cooling’