High On Fossil,
Low On Sustainability 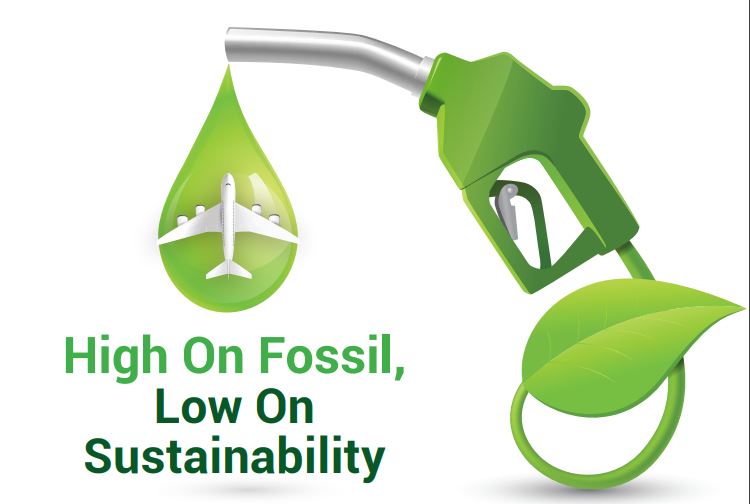 On the back of rapid growth in leisure and business traffic, the global aviation industry has been growing consistently. However, it has paid little more than lip service to environmental protection. Time to change that with rigorous emission curbs.

On December 7, 1972, almost five hours after yet another interstellar mission, this time the Apollo 17, had been launched from the Kennedy Space Center in Florida, the astronauts glimpsed a unique view from their spacecraft.

A strikingly unusual, huge, jade blue balloon-like object appeared in the dark sky. It was prominently visible through the window of the spacecraft. It was quite some time before the astronauts realised that it was our beautiful planet – the Earth. They went on to click pictures of the Earth, against the dark background of the space, with the sun shining from behind the spacecraft. Soon enough, that became one of the most widely distributed photographic images in existence. One could not only see illuminated Antarctica but also the 1972 Tamil Nadu cyclone that had battered the south Indian state just two days before.

Six months before the historic photograph, the first-ever international conference on the environment had taken place in Stockholm, which had brought most of the world leaders together to save the planet from the disastrous impact of indiscriminate human interventions. The beautiful image from Apollo 17 strengthened the resolve of the Stockholm conference to protect the planet.

But, that was not to be. It took another two decades, despite the stunning image of our planet, before global leaders agreed to hold the Earth Summit in 1992 to agree on Agenda 21, an ambitious blueprint to save the blue planet.

That also gave birth to several international conventions, on urgent issues such as climate change, desertification, biodiversity, and forest principles.

Come 2019, take a flight from Paris to Cape Town or from San Francisco to Stockholm, striking images of unusually burnt out deserts, mega white patches of cities bursting at their seams and mammoth tracts of deforested land and drying rivers are common views from aircraft windows. Closer views from helicopter rides reveal the loss of biodiversity and also the plastic pollution in the oceans, with the huge garbage patch floating and suffocating the marine ecosystem. From the space, the planet would still appear to be as pretty as ever but observe it closely and especially up close than from the space and you can see exactly how damaged is our Earth.

One can indeed thank aviation for a unique contribution in helping us look at the earth from various angles and altitudes and raise awareness about planetary challenges.

Unfortunately, however, the aviation industry is also one of the key polluters and factors behind climate change. Even if the industry currently contributes to less than 3 pc of total carbon emissions, its consistent growth is indeed a worry. And despite several promises of going green, the much-awaited flight of the industry towards higher levels of sustainability has not even left the runway. The ground reality is that the aviation industry is not doing anywhere near enough to curb its emissions and begin to go green, even though they easily can.

Since the late 1990s, the aviation industry remained confined to the fringes of climate change, prioritised public relation theatrics by spending millions on image building rather than actually taking steps to use its vast potential to demonstrate that when it comes to going green or protecting the Earth, the sky is indeed the limit. Ever since the first ever report by the Intergovernmental Panel on Climate Change (IPCC) was published in 1999, the aviation industry has remained complacent that their contribution including that from aircraft engines, satellite launches, spacecraft, to global greenhouse gas (GHG) emissions is under 3 pc of the total emissions.

The fact that such emission from aircraft engines uniquely takes place in the lower stratosphere, at an altitude of about 10 km above the earth, while all other Green House Gases (GHG) emissions caused by human actions take much closer to the ground, is totally ignored. The rate of growth of the emissions, current as well as future, due to increased air travel is well-known but the industry consistently downplays its extremely damaging impact on the atmosphere and the Earth’s ecosystem. And more importantly, the aviation industry is not just about planes in flight, but also about the manufacture of planes, spare parts, construction of airports with sprawling buildings and energy-guzzling air conditioning or even the traffic to and from airports to the cities. These crucial elements, which add up to the aviation industry’s GHG emissions are not even calculated and accounted for. In the absence of the airlines and other actors taking the necessary steps, concerned citizens have begun a movement to identify the culprits. The movement Flight Shame is spreading like wildfire around the world. A strong anti-flying movement has taken root in northern Europe. It has created a new dictionary that includes ‘flygskam’ which means ‘flight shame’ or ‘tågskryt’ or ‘train brag’. More and more famous personalities are abandoning air travels and opting for the train. Appreciable as these movements may be, they take a rather narrow view of opportunity for the aviation industry to go green. They only talk of ‘climate change’ shame, not the ‘sustainability shame’.

Let us first give the credit where it is due. With modern, aerodynamic designs, new materials and better engineering, the aircraft manufacturing industry has managed to improve the fuel efficiency of newer crafts dramatically. Both Boeing Dreamliner as well as Airbus 350 claim to have higher fuel efficiency, about 25-30 pc over the previous generation and if compared to other aircraft, the efficiency improves by almost 50 pc.

However, many environmental activists claim that the industry has focused its attention mainly on fuel efficiency for selfish reasons to get more profits, as fuel costs account for almost 30 pc of the total operating costs. They say that hiding behind fuel efficiency, the aviation industry has totally ducked the issue of sustainability and GHG as a whole.

Use of sustainable fuels like bio-fuels are the alternatives that have already been tried in many commercial flights. However, many industry leaders claim that it is in short supply and very costly. Taking away the land from food to fuel could also lead to another shame movement.

The Wright brothers’ first flight with fossil fuel in 1903 lasted for less than a minute, but it opened the door to what we see today as a mega industry that shows no way to retreat with over 1,400 scheduled airlines, more than 4,000 airports and over 200 air navigation service providers.

Solar Impulse, a project that was established in Switzerland, within 10 years of conception, took to air in 2016 and the aircraft with fixed solar wings managed to go around the world in just over 16 months in 2016. Can the aviation industry with its might take this experience of Solar Impulse on lines of Wright brothers?

Many airlines have social programmes to benefit communities. Those are well advertised, but can they do more on a mega scale or those efforts would remain as side-lined hobbies.

Some of the other sustainability issues that the aviation industry could easily undertake are:

• Undertake a comprehensive end-to-end mapping of the GHG emissions and other impacts of the entire aviation industry, taking into account all factors that play a role such as ground infrastructure, use of energy and water, travel to and from airports, etc.

• Providing a healthy ambience in the airports and in aircraft, indicating the quality of air that passengers breathe.

• Avoiding one-use-plastic in packaging at airports and on board the aircraft. Informing passengers what they do with food left over and the plastic waste.

• Starting emissions trading/carbon offsetting schemes among the airlines and airports.

• Airlines can also take it upon themselves to redevelop and regenerate forests by adopting patches of deforested lands. They can also hope to gain brownie points with their customers by flying them overhead and pointing out the work done by the airline.

• Provide grants to the researchers in universities for research on sustainable alternatives for the aviation industry.

Aviation and aerospace industries have amazing potential. The photographs and images from the aircraft of the transformed Earth could become as widely appreciate images as the image of a jade blue Earth. Per capita consumption of biscuits in India is currently only 2.1 kg per year as against 21.76 kg in Ireland

Order your Groceries Online in India

"Now, I can place my order while driving to work and delivery happens in the evening"

Helping Indian farmers to get the right prices

Per capita consumption of biscuits in India is currently only 2.1 kg per year as against 21.76 kg in Ireland

Order your Groceries Online in India

"Now, I can place my order while driving to work and delivery happens in the evening"

Helping Indian farmers to get the right prices