Kia and Cosmos: From Bengal to Cannes
Moving forward after landing at the big festival 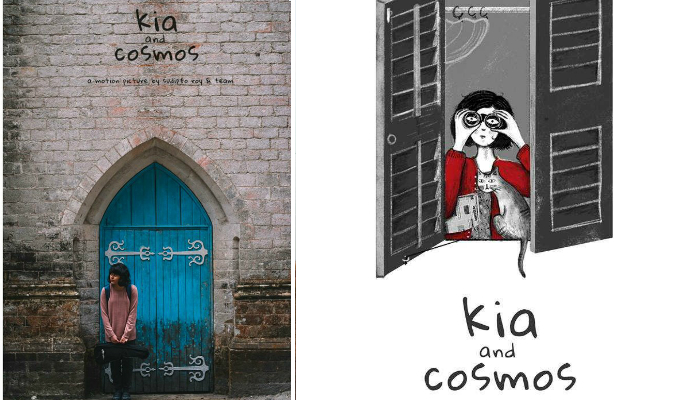 After having a successful screening at the Cannes Film Festival 2018, this independent film from Bengal (east India), is gearing up for a nation wide release.

The story of a 15-year-old girl diagnosed with Pervasive Developmental Disorders (PDD) resolves to write a mystery novel, while taking on the investigation of her neighbourhood cat’s murder that leads her to an audacious journey from Kolkata to Kalimpong – Kia and Cosmos is written and directed by Sudipto Roy.

In March 2018, at the Cannes Film Market, the largest in the world, Prachi Kanodia, producer of the film and Roy, presented the movie to a large audience of cinema professionals including actors, producers, directors and critics and garnered a positive response for their work.

Starring debutante Ritwika Pal, Bengal’s beloved Swastika Mukherjee, Joy Sengupta, Sraman Chatterjee and Zahid Hossain, the film touches upon the universal themes of parenthood, alternate education, class divisions and the thrill of mystery novels for teenagers. “While the intrinsic challenge was to bring to people the idea of an ‘otherworldly’ girl in a manner that is relatable, the consistent belief of the cast and crew put together moments of honesty and magic,” states Kanodia.

The film is currently gearing up for its post-production phase while the team is set to launch an eight-month long alternate education campaign for special children across schools in India with the objective of equipping children with a vocational skill of their choice. While the team envisions showcasing the film to audiences across Europe, North America and South Asia, Roy keeps his fingers crossed as they gear up for an early 2019 theatre release in India.

“As a filmmaker, I have tried to bridge the gap between independent low budget films and commercial regional cinema asserting the fact that filmmaking is not a rocket science and an organic storytelling can easily take care of commerce keeping the aesthetics of cinema intact. The experience in Cannes was enlightening for me as a film lover at the same time it was really dismal being an Indian. The sloth and sluggish movement of Indian cinema even if it’s towards development is very evident. I aspire to take my film to a few more international film festivals in the coming months,” says Roy.

Partly crowd-funded, the film had garnered enormous support in the country. With social media initiatives like #KiasPiggyBank and fund-raising events like #JourneyGreaterThanDestination that saw Kolkata’s Independent Artists come together. The film was shot on Panasonic Lumix GH5, tucking another feather in the hat of the vogue of films made with smaller cameras. The film also pays its tribute to Bengal’s iconic literary sleuths Feluda and Byomkesh Bakshy, making Kia India’s first girl-detective.

Reactions from cinephiles at Cannes

Uwe Lauer, filmmaker, producer, Germany: I am so sad that India too is plagued with broken marriages that Germans have been subjected to for so many years. The film was very well made and for a first-time filmmaker like Roy, it’s absolutely fantastic.

Arthur Reinhart, cinematographer, producer, Poland: I loved the colours of the frames, the set design the acting. The story was very relatable and will be great to watch when the entire post-production will be done. I knew Indians make films which have song and dances, but this film is very different and I would like to know where these films end up. It has a very good future in the festivals!

Jade Amanda Harris, British film critic and PR: My mother and I loved  Kia and her mother’s chemistry. My mother cried. I think the film is very well made and we would love to watch it in London when it releases!

Prachi Kanodia, producer, Kia and Cosmos: I love the way the Cannes film festival happened for our film and I am glad that I am here with my director. The platform is great for first-time filmmakers and it is quite encouraging for me and Sudipto to be a lady of this prestigious film event.

In an exclusive chat with MIG at Cannes, Bajpayee says filmmakers are born rebels

In conversation with Nawazuddin Siddiqui

“I will never do a small character again,” Siddiqui

In an exclusive chat with MIG at Cannes, Bajpayee says filmmakers are born rebels

In conversation with Nawazuddin Siddiqui

“I will never do a small character again,” Siddiqui