Costumes have traditionally played a crucial role in the success of Indian films, especially period films, biographies or the films showing extravagant Indian weddings. Use of technology has only enhanced the lure further.

When an Indian goes to see a film it’s to lose himself in a different world and to go back home full of amazing images. Thus, besides a storyline that borders on the fantastic and with the usual song, dance, music and the obligatory scenes of the hero battling and vanquishing the villain, costumes of the actors play a key role in creating the alternate world. For, what would an Indian film be without its colorful and glittering costumes and accessories. Each film and often all the key scenes require intensive work and research to dress and prepare the actors based on the different themes and decor.

And of course, for the largest cinema industry in the world, churning out over 2,500 films a year, a large industry catering to the costumes of the actors has blossomed around all the key film centres in the country. Costume production comprises of independent tailors, designers, stylists and theatrical supply shops. Between the film set and the source are the people known as ‘dressmen’ who take care of costumes.

Most cinegoers would remember the famous movie Devdas (2002) that took the entire planet by a storm and revealed to the world Aishwarya Rai and Sharukh Khan in exotic costumes. Notably, the pair got a standing ovation at the Cannes film festival in 2002 where the film was premiered. The film won widespread praise for its flamboyant sets and costumes.

Aishwarya Rai was playing the role of Paro, a young Bengali woman full of life and romance in the West Bengal capital – Kolkata of the 1930s. To drape her, noted Indian designer Neeta Lulla had to dig deep in the large textile markets of Kolkata. She came back with no less than 600 saris (traditional Indian attire for women, elaborately draped around the body) that she assembled to create her dresses. The young Paro could then be seen wearing half saris in simple cotton, with her wild and uncombed hair floating in the wind while running and dancing in an infantile manner. The second part of the film shows her with a more serious look, married, she is wearing heavy saris of a mini-mum of 7-8 metres. With her long black hair tied up in a bun, a big bindi (decorative mark worn in the middle of the forehead by Indian women, especially Hindus) on her forehead and sadness in her look, her destiny seems to be frozen. On his side, the young Devdas, returning from Oxford, was dressed in vintage suits sourced from London, while alcoholic Devdas, who had lost his love, was wearing typical indian dresses like kurtas (tunic) and dhotis (traditional attire for Indian men, tied around the waist).

“When I am doing a project, I keep in mind the script, the vision of the director, how they see the film, the characters, the actor who is playing a particular character and his comfort level. I focus on designing clothes that make the character look believable. I also look at the kind of background being used for a particular scene, the shade of the film or story; all these things have to be considered before choosing the colour palette,” explained Neeta Lulla in an interview with an Indian newspaper.

She also emphasises the challenges faced as a costume designer, “In the 80’s the films were depicted larger than life. The only main challenge then was to construct each and every garment from scratch. This is not the case any more in today’s time. Now many brands have come up in the market. The clothes that are available in the market such as jeans, t-shirts can be shopped, while in 80’s and 90’s the options were very limited. Getting costumes done during that time used to be cumber-some because of the lack of man power.”

Indeed, the costume design business is not a new trend but has been famous since the beginning of the Indian cinema industry. Some old films remain exemplary for the quality of their costumes. Few examples are Shree 420 screened in 1955 starring Raj Kapoor and Nargis wearing a natural look and clothing from the post independence India. Kashmir Ki Kali (1964), showcasing the traditional local kashmiri look or Mughal- e-Azam, (1960), Pakeezah (1972) and Mere Mehboob (1963) highlighting a traditional Indian Muslim look with woman wearing trendy head scarfs and beautiful jewellery.

A ‘select club’ of designers

Cinema being ‘king’ in the country, it is no surprise that many Indian designers decided to turn towards the business of film costumes. “I feel with such varied stories being told on the silver screen and with increasing authenticity, more and more emphasis is being given to costumes,” told the designer Anju Modi to the South Asian news network IANS. After a long career in fashion design, she recently entered the very select film costumes designers’ club with the Bollywood movie Goliyon Ki Raasleela Ram-Leela (2013). “Ram-Leela was my first movie and the adulation I have received for it has only added to this enriching experience. As a designer, I have always enjoyed working with traditional Indian techniques and Ram-Leela allowed me to be true to my aesthetic and research even further on the traditions and costumes of Gujarat,” she added. And working for Bollywood certainly pays off! Since the release of the film, Modi has been flooded with orders from around the world.

Another famous Indian costume designer is Bhanu Athaiya. She published a coffee table book ‘The Art of Costume Design’ in 2010, describing her journey of designing costumes since 1961 for various movies including Lagaan (2001) where she worked on the typical ‘Indian village look’ or Gandhi (1982) directed by Richard Attenborough and for which she got an Oscar for ‘Best Costume Design’ at the 55th Annual Academy Awards in 1983. In her book she notably quotes Attenborough, “It took me 17 long years to set up Gandhi, my dream film, and just 15 minutes to make up my mind that Bhanu Athaiya was the right person to create the many hundreds of Indian costumes that would be required to bring it to the screen.” Winning the Oscar not only put India at the centre of attention internationally but also shared the authentic vision and research made to immerse the people into the world of Gandhi. The designer, now in her 80s, still works and shares her experience with younger generations of costume designers.

Working for the prolific Indian cinema industry can make anyone famous and today’s costumes’ designers have set up their own shops selling movie-like dresses. In the Qutub Minar area in Delhi, Manish Malhotra sells his label on the foundation of his association with the Sheetal Design Studio. Neeta Lulla also does a large amount of personal work for celebrity clients.

From Bollywood to fashion trend

Indeed, if Aishwarya or Deepika is wearing it, I also want the same! Needless to remind anyone that Indian stars represent real examples for the Indian society, whether it is what they say, the car they drive or what they wear.

Some famous dresses of Bollywood stars became fashion trends for an entire generation of Indians. For example Madhubala’s blue and red embellished costume in the song ‘Jab Pyaar Kiya to Darna Kya’ (Mughal-e-Azam, 1960) is now famously termed the ‘Anarkali’ style. Often worn for parties, Anarkali has become a part of the wardrobe of Indian girls. The overseas trends were also showcased with Zeenat Aman and her hippie look in Hare Rama Hare Krishna (1971) or the Bengali actress Sharmila Tagore in ‘An Evening In Paris’ who, in the late 1960s, introduced the swimsuit to a very conservative Indian society. Dimple Kapadia in Bobby (1973) also charmed the people with her sexy retro style in polka dotted top and mini skirt in the 70s. Here the dresses not only set the trends but they also allowed women more emancipation.

With the dresses also go accessories like jewelleries and, of course, the makeup and hair style. Here again, more than ever, the style goes with the theme of the movie, an example could be Deepika Padukone remembered for her astonishing hairstyles in her debut film Om Shanti Om (2007) where she carries a retro look in the Golden Era of Bollywood.

But all Indian movies do not have such an artistic approach towards costumes and look. Many of them might also disappoint you, some choosy stars prefer to wear dresses that are ‘in’ more than what suit the personality of the character they have to play. “When I work, it really depends on who the actor or actress is…Some are very specific about how they want to look…Some are open to new ideas. But usually I would be given a theme or a look by the director and the team,” shares Vithya, a tamil makeup artist based in London and who often works for South Indian films. “As far as make up is concerned, what’s important is that it should make the actor or actress look as natural as possible ; in a glittering industry like in India it can be a challenge,” she added.

From a western perspective, the avoidable fantastic and eccentric attires often increase the lack of realism but in India, costumes and style in films will continue to inspire millions of fans. After all, there is no accounting for taste. 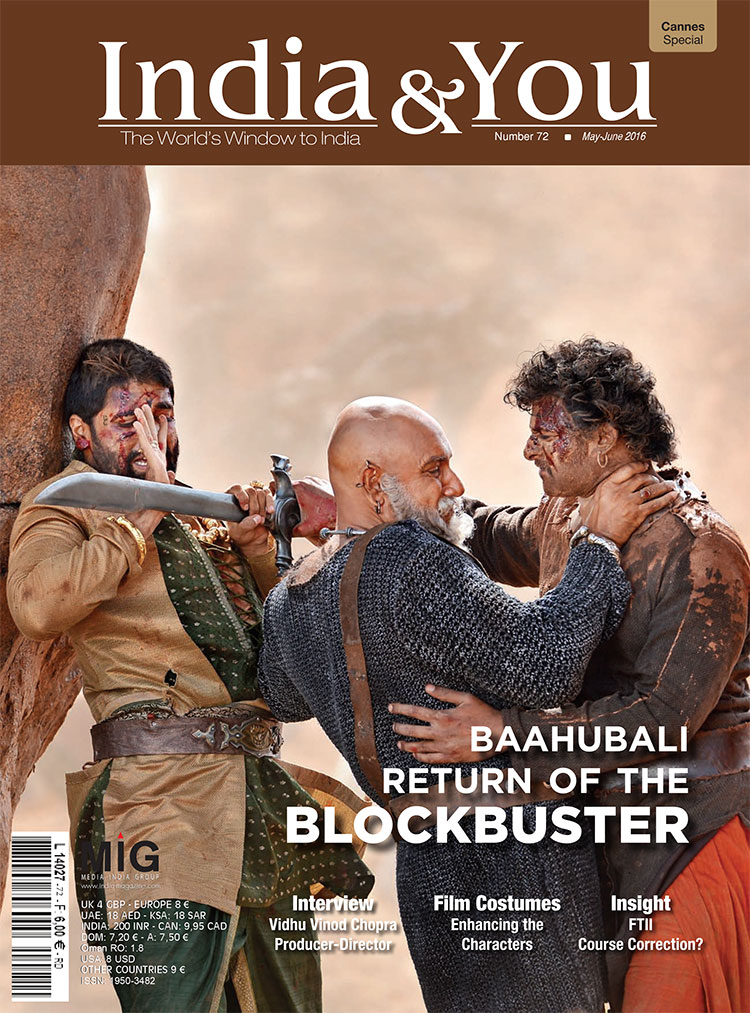 As Cannes is around the corner we bring to you yet another special issue on Indian cinema. With interviews such as that of produce-director Vidhu Vinod Chopra and actor-turned-director Nandita Das, we... Read more