Keeping pace with the rest of the world, India has been moving to a digital economy fairly rapidly. However, there exists a ‘digital divide’ due to poor connectivity and other grey areas, which need to be addressed to leverage the digital economy. In response to some of these challenges, the Indian government has launched Digital India initiative.

Today anything is just a touch of finger away! We book travel, movie tickets without stepping out of the house, reply to emails while on the road or in the metro, and manage bill payments, banking and shopping as per our convenience. The outcome of these 24×7 activities is a huge increase in the internet traffic, which is rapidly changing the traditional economy. Though India has come a long way in using internet and e-commerce, it still has miles to go as far as taking the internet to the entire population of the country as currently only 20 pc of Indians use the internet, while the comparative penetration in other emerging economies is nearly 30 pc of the adult population.

It took almost a decade for India to get her first 10 million users and another decade to hit the first 100 million, according to a report ‘Digital India: Insights for Marketers and Media Companies’, released by the US-based management consultancy group – The Boston Consulting Group (BCG), adding that the next 100 million users came in three years between 2010 and 2013, and the third 100 million took only 18 months. Internet users crossed 300 million in December 2013. “The new user base by 2018-19 would be 500 million and a digital population of 500 million could transform India’s economy, business landscape, governance and society beyond recognition,” Prashant Mukharji, senior analyst, BCG, says.

Virat Bhatia, member, communications & digital economy committee, FICCI (Federation of Indian Chambers of Commerce & Industry), says, “This is a four-fold increase from where we are today and the growth will come in just three years. Every second Indian will be an internet user in the next two years. The biggest growth will come in e-commerce, which will expand almost five-fold, while education and healthcare via mobile internet will expand internet use.”

Startups are giving boost to the digital economy. There are at least five startups that have crossed a billion dollar in value: travel portals like Makemytrip and Cleartrip, homegrown e-commerce giants such as Flipkart and Snapdeal and InMobi (mobile advertising company). With ambitious programmes like the 10,000 StartUps programme of the software industry body National Association of Software and Services Companies (NASSCOM), which is targeting at promoting 10,000 startups in India by 2023, hopefully many more billion dollar companies will sprout in India. “The maturing Indian start-up ecosystem is now contributing to the Indian economy in many ways. Apart from positively impacting the lifestyles of citizens involved, start-ups are now creating innovative technology solutions that are addressing the key social problems that India is facing and creating significant growth opportunities for every stakeholders. To enable the next stage of growth for these start-ups, NASSCOM will work closely with the government to ensure ease of doing business, by simplifying procedures and create a conducive environment for these start-ups to grow,” says R Chandrashekhar, president, NASSCOM.

Global investors are already chasing Indian startups. Former Skype chief operating officer, Michael Jackson, is looking to invest in internet startups in India through his USD300 million Luxembourg-based venture fund Mangrove Capital Partners. “I am bullish on India’s internet economy. With 500 million users it will be the size of Europe. There are challenges like low bandwidth, but that won’t prevent the upcoming internet tsunami,” Jackson told an Indian business daily.

Not only is there wealth creation due to the use of the internet, but massive jobs creation too. Mukharji from BCG says, “About 400,000 people now find direct employment because of the internet. This will expand to 2 million by 2020. India’s internet economy could eventually create 65 million jobs and increase per capita income by 29 pc as more people come online.”

Adding to this is one of the pet projects of Prime Minister Narendra Modi, ‘Digital India’ which seeks to transform the country into a digitally empowered society and knowledge economy by 2019 with an aim to introduce broadband connections in 250,000 villages, net zero imports by 2020, and 400,000 public internet access points at the overall cost of INR one trillion (Eur 14 bn). But again it is a long way to go. The country’s digital success lies in its internet connectivity. The hurdles are very much there which can derail the project.

Mark Zuckerberg, CEO & founder, Facebook, in a statement at the launch of internet.org app for India last year, said, “To continue connecting the world, we have to connect India. More than a billion people in India don’t have access to the internet. That means they can’t enjoy the opportunities many of us take for granted, and the entire world is robbed of their ideas and creativity.” Most of the internet connectivity in India is 2G. For example, of the 210 million subscribers of India’s largest telecom company Airtel, only 11 million had access to 3G mobile internet in September 2015.

According to US-based content delivery network and cloud services provider Akamai’s Q3 State of the Internet Report, India has the average connection speed of 2.5 Mbps (megabits per second). Around 14 pc of India has a broadband connection of 4Mbps and only 2.3 per cent has a speed of 10 Mbps. All levels of government as well as businesses face problems when they rely on the use of heavy interactive elements such as videos and real time communication to engage with their customers and set themselves apart from the competition which contribute to the bandwidth consumption and slows down web performance.

The ‘World Development Report 2016: Digital Dividends’, report prepared by the World Bank stated that almost a billion people in India still need to connect to the internet for pushing growth, creating jobs and accessing public services. The report also pointed that India had the most restrictive market regulation in retail finance and banking.

Highlighting the language challenges in India, which has over 40 major languages, Sanjiv Gupta, executive chairman & managing director of a local search engine askme.com, says, “So far internet penetration in India has been in the English-speaking communities, while new users will demand local languages interfaces to shop, pay bills, to reach out to doctors online and more. About 75 pc of new users will come from non-English speaking backgrounds. They won’t find it easy to navigate unless they can shop or study in their own language,” adding, “HDFC Bank, which has an English app that enables 75 transactions from booking fixed deposits to ordering cheque books, is now focussing on expanding its Hindi app as well. The Hindi HDFC Bank app enables 26 transactions and the bank plans to add more transactions this year.” Even Facebook is available in 12 languages, which cover a large part of India’s population. Hindi alone covers 400 million people. This was mentioned by Zuckerberg.

Moreover, mobile payment services provider Paytm, which claims 27 million users, is developing vernacular versions. Another startup, ikaaz, founded by former Nokia managers is working on making payments easy using smartphones — in English at present with plans for vernacular languages soon. At e-commerce major snapdeal.com, the mobile app is in English while the website offers a Hindi and Tamil interface as well.

A ray of hope

Despite the connectivity challenges, more people are coming online. According to Ozone networks, an internet service provider which has set up 6,500 hotspots at places including Mumbai airport as well as outlets of fast food restaurants such as KFC and McDonalds, about 45 million access internet in public areas and time spent online has gone up from 10 minutes per day one year ago to 45 minutes now.

Bhatia from FICCI adds, “Around 10 pc rise in the internet penetration increases GDP by 1.08 pc. If the internet were a sector its weight in GDP would be greater than that of agriculture or utilities.” While talking about jobs, Gupta from askme.com, says, “For every one job lost, 2.6 new jobs are created in an internet economy. In France, in 15 years, half a million jobs were lost and 1.2 million jobs were created due to the internet. Job creation will be both direct — in tech-based enterprises and indirect — to support the internet economy like digital ads, services support for devices. Around 1.5-2 million new direct jobs will be created by 2018 in the Indian internet sector. Internet economy will enable a shift to high-skilled labour and increased autonomy to labour. In e-commerce alone new jobs are increasing by 30 pc a year.”

Chandrashekhar from NASSCOM, says, “There will be more internetdriven startups. Cost of starting a company averaged USD5 million in pre-internet era and now it is under USD 50,000, attracting more people to start companies. The gestation period to test whether an idea works or not is less than 18 months now. And the initiatives like 10,000 startups augur well to make access to capital easy, a big boost for entrepreneurship. There will be at least one startup that scales to USD1 billion valuation in each of the next five years.”

Recent initiatives like Digital India have the potential to generate greater digital dividends; however there is a need to work on the prevailing challenges. Reaping full benefits will need wider access to the internet that enables everyone to leverage the digital economy.

Digital Taxation: Is India getting ready to follow OECD?

In October last year, OECD (Organisation for Economic Cooperation and Development) released its final report on the tax challenges of the digital economy (Action 1) under its Action Plan on Base Erosion and Profit Sharing (BEPS). The report provides the OECD’s conclusions regarding the digital economy and recommended next steps to address the tax challenges presented by its evolution.

The digital age has led to significant tax policy challenges, which have been the concerns of several countries, including India. And this was clearly examined by OECD in its BEPS project. It broadly considered three main points to address challenges arising from the digital economy – first, new nexus test based on significant economic presence; second, withholding tax on digital transactions; and third is equalisation levy.

Considering India’s longstanding concerns for digital taxation, the Indian government constituted a committee to examine and make recommendations. And it was highlighted in the recently announced 2016 Union Budget where it was decided to implement a road map for India’s commitment to be BEPS agenda. As part of the budget, it is proposed to introduce a new chapter titled ‘Equalisation Levy’ in the Finance Bill, to provide for an equalisation levy of 6 pc of the amount of consideration for specified services received by a non-resident not having permanent establishment (PE) in India, from a resident in India who carries out business or profession, or from a non-resident having PE in India. Finance Minister Arun Jaitley said that in order to meet with the commitment to BEPS initiative of OECD and G-20, the Finance Bill, 2016 includes provision for requirement of country by country reporting for companies with a consolidated revenue of more than Euro 750 million.

Instead of a straight tax on digital advertising platforms, this move was smartly introduced in this year’s budget, directing to the companies like Google and Facebook to pay for the money they make from local advertisers. The 2016 Budget shows that India is fully committed to implementing a number of BEPS recommendations that may get implemented over a period of time. 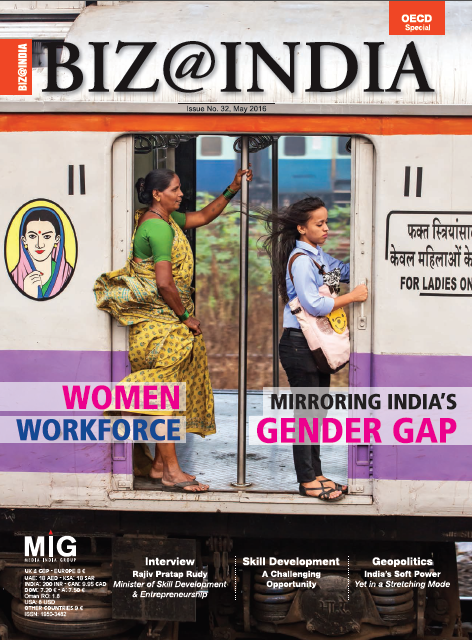 This Biz@India special issue published on the occasion of the Organisation for Economic Co-operation and Development (OECD) Forum 2016 organised in Paris is an a opportunity to debate global policy is... Read more

U-turns in policies may lead to about-turn by investors

U-turns in policies may lead to about-turn by investors