Terror attacks have led to uncertainty about travel to one of the world’s most popular tourism destinations, with numerous cancellations, but the Parisian tourism industry is far from beaten.

The day after the terror attacks of 13/11, Paris saw numerous cancellations, mainly of tourists from neighbouring European nations. The situation did not change for the better for nearly two weeks, with most hotels registering a sharp fall of between 24-29 pc in occupancy.

But the impact on the hotels was nothing compared to the hit taken by the bars and restaurants. Most restaurant owners in and around Paris saw their business plunge by over 50, even 66 pc, as not only the tourists, but even the local patrons stayed away, fearing a repeat.

The story was no better in the shopping malls, where traditionally November and December are the busiest months of the year, generating more than a third of the total annual business, with the focus on a series of key dates like Christmas.

But slowly, the situation is improving and patrons, local and foreign, are returning to their favourite places. Paris has for centuries been considered as one of the top travel destinations and most hoteliers and other businesses hope that it will soon reclaim its position amongst the top tourism places in the world.

The tourism industry seems to be far from beaten. Romi Trehan, director, Swiss Holidays, says, “After the Charlie Hebdo incident in January this year, travel to France dipped quite a bit, but then recovered after about two months. If a similar pattern holds true this time, a recovery in travel bookings to France would come after the first of the New Year (2016) – still typically time enough for travellers to get good deals on airfares. So, even if France takes a serious hit in the upcoming weeks, French tourism has a chance to recover in time for bookings for next summer’s peak travel season.”

Karan Anand, Head Relationships, Cox & Kings, says, “Indians travel to Europe in large numbers and Indian outbound to Europe has been on the rise and in percentage terms it is in double digits. The unfortunate incidents in Paris will not cloud the judgment of the Indian traveller as Europe continues to be a must-visit destination for Indians. An incident in one part of Europe will not have any long-term impact of traffic flow to these destinations. However, people have become more cautious while travelling and we advise them to take necessary precautions.”

“The bookings for Europe are done much in advance and we have not experienced any cancellations so far. All our Europe tours are going as per the schedule. We are grateful to our customers who are showing faith on us and we are committed to provide them the best of travel experience,” adds Anand.

In light of the attacks, the government of France declared an emergency and took exceptional measures for traffic regulations and the security of people. After three days, all cultural establishments of Paris and the Ile de France (the greater capital region) were reopened to the public. The Eiffel Tower and the Louvre Museum (closed every Tuesday), the Philharmonic de Paris, the Grand Palais, the George Pompidou Centre are open. Lido de Paris, The Crazy Horse, Le Moulin Rouge, Les Bateaux Parisiens are opened as well. The Parisian airports are functioning as normal. All international and domestic air connections are well in place. Security measures on airports have been enhanced. Passengers are requested to reach the airport well in advance keeping in mind security checks. Systematic controls at entry points in the country are being carried out at road crossings, railways, ports and airports. SNCF, the French railway system is functioning normally. All department stores and commercial centres are also open. Disneyland Paris, the Vincennes Zoo and the Aquarium of Paris are also welcoming visitors.

On reopening, the Eiffel Tower was lit up in the colours of the French flag for three consecutive nights. Bistros in Paris rallied together to launch #TousAuBistrot, a social media campaign to drum up business by encouraging people to carry on dining and drinking in the city. “The feedback I am getting from visitors and tour operators is that there is no panic,” Francois Navarro, from the Comite Regional du Tourisme Ile de France (France Regional Tourism Committee), told to Thomson-Reuters, a news agency.

Biometrics – to add value to tourism

In addition, what will add boost to tourism is introduction of long-term, biometric visas. François Richier, Ambassador of France to India, said that the technology that is supporting the process has “additional security” features and will help “sharply increase” the number of long-term visas from India. “The system will make life easier for Indian travellers and address most of the concerns that existed before,” he said. The processing time has been reduced to 48 hours more than a year ago. Now, with the implementation of biometric system, the process will become more secure and fast.

Ambassador Richier said that France has “anticipated” the building up of interest among Indian leisure and business travellers while implementing the new visa system. “There was a growth of 34 pc with 97,000 visas issued for France from India in 2014. It is expected to grow further by more than 50 pc this year, he added. In the first 10 months of 2015, the number of visas issued from India has already crossed 121,000. We are confident that the number will easily reach 150,000 this year,” he added. 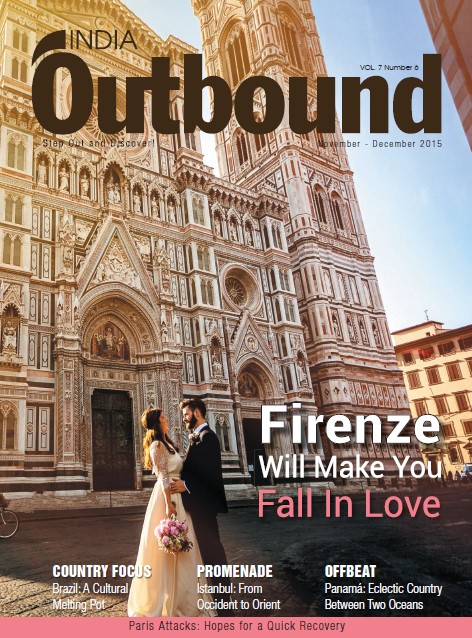 The highlight of the issue is the largest country in South America – Brazil, which is both a tropical paradise and an exciting cultural destination with attractions for ... Read more

Surf’s Up in Peru

Trends of the Past and What Awaits

By 2020, two out of every five travellers are expected to be Asian

For the Indian Taste-Buds!

Explore at Your Own Pace

Surf’s Up in Peru

Trends of the Past and What Awaits

By 2020, two out of every five travellers are expected to be Asian

For the Indian Taste-Buds!