A key solution to eliminate poverty, improve sustainable livelihood and environment, and find a way out of global slowdown is grassroots innovation, according to Dr Anil Gupta of the IIM, Ahmedabad. He has networked innovators from the grassroots while criss-crossing India for over three decades.

You will be addressing the Vibrant Gujarat Summit 2017. It will be attended by global leaders, chief ministers, policy makers, scientists and civil society activists. What are your expectations?

It is a watershed event as diverse groups of stakeholders interested in India’s development story will be present. They need to know the potential of the Indian society so that they can invest in it, and also engage and collaborate with it. The story I am going to share with them is about the grassroots innovation of young entrepreneurs, farmers, artisans, students, children and women.

India is a hotbed of innovations. Yet, it is caught in the vortex of crass commercialisation, mindless consumerism and globalisation. What is your take?

We got held away by the conventional model of globalisation, where large corporations have been indulging in ‘caladaway approach’ (winning people’s trust, sell them goods and services and soon betray them). What we have done in the Honey Bee network is to reverse the model. We call this G2G; Grassroots to Global. So far, global capital was sent to grassroots. I think, it is important we realise that these innovations not only teach us about the products and services they are providing but also teach us about innovations at four different levels – artefactual, metaphorical, heuristic and gestalt.

A windmill innovation in eastern India may not be of interest to a large corporation. But, what it teaches us is important. It teaches us how to be frugal in using available resources.

This is what Mohammad Mehtar Hussain and his brother Mushtaq did. They designed a windmill in less than USD 120. What’s it made out of? Bamboo. The idea was to run a hand pump to pump water to irrigate a small paddy field. No big lab or big company could imagine that you could fabricate a solution at that cost for common people. Why do we use drip irrigation? Simply because water is fed a drop at a time. Paddy does not need irrigation, but simply moisture. Usually, people pump ground water, for which power is needed. The soil gets flooded and, as a result, nutrients are washed away. So, frugal innovation is more sustainable, environment friendly and economical. This is what grassroots innovations teach us.

You undertook shodyatras (innovations journeys) for more than two decades. How much did you unlearn what you learnt and did it reveal new perspectives to you?

Absolutely. I unlearned so much. We are undertaking the 38th Shodyatra to Nagaland. With this, we have criss-crossed the entire country. Let me give you an example to illustrate the unlearning that takes place. We were in Purulia in West Bengal. In one of the villages we came across beautiful terracotta horses kept under a tree on a small platform. We asked potters as to why they kept such beautiful horses in the open under a tree as somebody could break it. They corrected us by revealing that they kept just their best works outside. The objective was to let all their children walk by and witness the current standards of the best. They wanted their children to realise that they have to do better. Where have I read this kind of open source standards of excellence in management books? This is what will lead India to a new horizon.

So, minds on the margin are not marginal minds.

Yes. The problems with which we learn to live for so long are being solved by the not-so-educated lot. Our grassroots innovators are solving issues, which even large corporations have ignored or given up on.

Is there a silent conspiracy against grassroots innovations?

About 250 million Indians are guaranteed employment in rural areas. To do what? Just to dig the earth, break stones and do menial tasks since they are considered unskilled by nature. For several thousand years, India has been a society of sculptors, masons, singers, song writers and craftsmen; people who can read soils, clouds and waves in the sea. Some of them use the traditional skill system and others rely on the contemporary knowledge system. To call them unskilled is a tragedy.

So, I had mooted a proposal to allocate 15 to 20 days to mental work instead of menial work. Why can’t we engage our communities to map knowledge, biodiversity and resources? Our entire scientific community can add value to that. This is an example of how we have failed the creative and poor people, who possess riches that we have not recognised.

Are there any takers for your proposal?

Shortly you will hear certain initiatives from the central government to unleash creative powers. Already, they have taken a decision to invite one million original ideas from schools. We will help tap them. Our children will learn to be original, innovative and creative.

India has an ambitious skilling programme.

We have told the Ministry of Skill Development that we should focus not only on traditional skills but also on new skills; skills required to produce new solutions; skills of designs, fabrications and innovations to solve problems. Start-Up India, in some way, works in this direction.

Do you think enough knowledge is shared with the poorest of the poor to help them break the vicious cycle of hunger, debt and poverty?

We did a study on suicides in Vidharba. If you grow lady’s finger around a cotton crop, it can help control pests. The flowers of the lady’s finger are similar to that of cotton. Lady’s finger belongs to the same plant family and blossoms earlier than cotton. By attracting pests, it can reduce the impact of pests on cotton. Unfortunately, this information travels to Jalgaon from Ahemedabad, but does not go to Chanderpur, Vidharbha and Yavatmal.’

I think the need to propagate lowcost but highly effective sustainable solutions amongst those who have not discovered them is a challenge waiting to be addressed.

How many grassroots innovations have been patented in India?

So far, more than 70 technologies have been commercialised, 730 patents have been filed on behalf of their inventors, and another 10,000 innovations placed in the public domain. Commercialisation of these innovations have led to new concepts, such as the Technology Commons where knowledge transfer between individuals is encouraged without a fee, while knowledge transfer from person-to-firm requires licensing protocols.

How many big Indian businesses have approached you for commercialising patents?

So far, none. The multinational companies are keener to approach us to find out how frugal innovations take place.

Which are these MNCs?

The Honey Bee Network was born after you visited Bangladesh. Are you networking grassroots communities in India’s neighbourhood?

China has the strongest Honey Bee Network outside India, and we have over 6,000 innovations from 30 provinces of China. We have started with Bangladesh and Sri Lanka.

China has been very responsive. They have realised what they have missed. We have helped them tap innovations from these 30 provinces. Our dream is that India should become the largest provider of innovations in the world.

You founded the Honey Bee Network, National Innovation Foundation, Society for Research and Initiatives for Sustainable Technologies and Institutions, and Grassroots Innovations Augmentation Network. What is next on your agenda?

Every school and college should have an innovation club. They must research, innovate and celebrate innovations. Once we make an inventory of unmet social needs of 650,000 villages in the country, accountability of science and technology system would be linked to it. It has to be met in a time-bound manner. We should move towards a global innovation foundation, where India should spread the message of innovation. 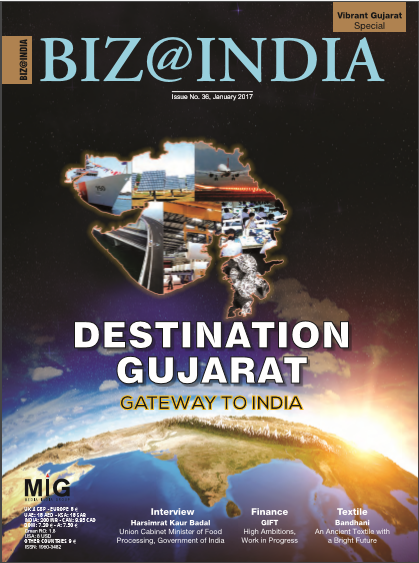 In this issue of Biz@India, we take you to a 'Vibrant Gujarat' which is looking at newer business opportunities from around the world. A one of its kind business meet, the Vibrant Gujarat being hosted... Read more