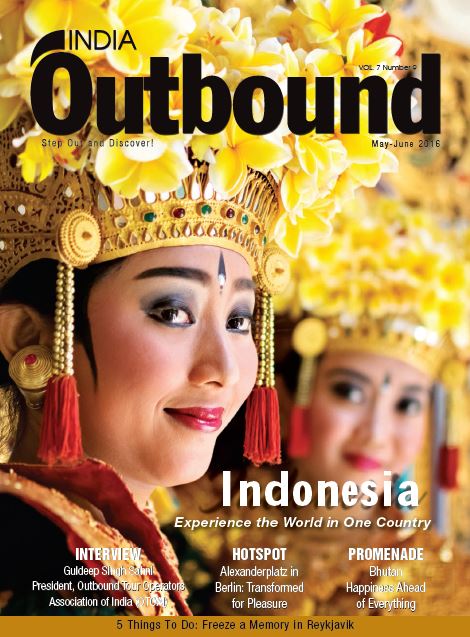 Composed of over 17,000 islands, about half of them inhabited, Indonesia is rich in beauty, biodiversity, beaches and of course cultures. The country is home to exotic animals like the Orangutans or gigantic monitor lizards and several other endangered species. With such offerings, it is no wonder that the country received nearly 9 million tourists of which 0.2 million were Indians in 2015. Apart from Indonesia, we also take you to other Asian countries like Japan to experience the Cherry Blossom and to the happiest country in the world – Bhutan. From Asia to Europe, we take you to Germany where Alexanderplatz in the heart of its capital Berlin will serve your cosmopolitan taste. And for delectable options we have Dijon in Burgundy for cheese, mustard and wine. Then we stop at the freezing capital of Iceland Reykjavik to suggest the five things not to be missed!

Reykjavik, the capital city of Iceland is home to architectural marvels, designer decks, unique museums and the Blue Lagoon. Visit this island country of the North Atlantic ocean and traverse a colourful, touristy affair.

With lack of direct flights from India to Indonesia becoming a major roadblock for the airline’s growth in the Indian market, the future is yet to unfold in the coming months.

the Outbound tour Operators Association of India (OtOAI) was created in 2011 to help the outbound tour operators even as outbound tourism from India continues to boom, says guldeep singh sahni.

During the Cherry Blossom Season of Sakura

The Land of the Rising Sun – Japan – invites the world on a Sakura pilgrimage as the country welcomes the fairy-like cherry blossoms in its every nook and cranny.

Happiness Ahead of Everything

Welcome to Bhutan, a country where Gross national Happiness (GnH) is the primary focus of governance and not Gross domestic Product (GdP).

Indonesia: Islands Beyond India   Indonesia has been emerging as the travel hotspot for Indians pertaining to the cultural similarity between the two countries and a wide range of itineraries on offer. Other aspects such as free visa-on-arrival come in handy. How important is India for you? India is an important market for Indonesia. According … END_OF_DOCUMENT_TOKEN_TO_BE_REPLACED