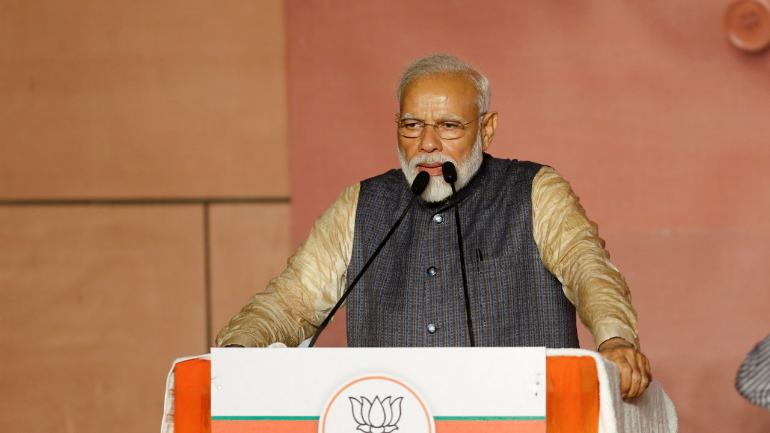 After storming into office for a second time with a thumping majority, challenges for Narendra Modi’s government has not wilted in any way. Instead it has taken myriad forms…

Last May the ruling Bharatiya Janata Party (BJP) under the able leadership of Prime Minister Narendra Modi returned to power with greater strength, an increase of 20 seats, from 282 in 2014 to 302 in 2019. That achievement relegated to history, India now has stepped into the 2020. However, challenges for Modi and his team have only grown in all fronts-be it political, economic or social.

Economy: Modi government’s worst nightmare is the performance of Indian economy. The government has to prepare a road map for making India a USD 5 trillion economy and implement it as well. How it plans to turn it around is huge task.

The Indian economy is expected to grow by 5 pc this financial year. This is the slowest pace since 2008-09 when growth sank to 3.1 pc as a result of the worst global financial crisis.

The Reserve Bank of India (RBI) in its December monetary report said that the economy would grow at a meager 5 pc in 2019-20 as opposed to 7.2 pc that it had predicted in April this year. Similarly, the index of industrial production statistics, released by the Ministry of Statistics and Program Implementation, showed that India’s industrial output shrunk by 4.3 pc in September, the lowest since October 2011.

Infrastructure investment has been sluggish and needs to pick up.

Jobless:  Of 1.36 billion estimated population of India, 67 pc is in 15-64 years bracket. This puts the job-seeking population over 910 million. Not all of them would actually be looking for job but this figure itself is a challenge to any government.

Tough time for export: India’s exports are expected to touch USD 330-340 billion in the current financial year. But global situation is becoming extremely challenging as rising protectionism is leading to uncertainty in global trade which will have adverse impact on it.

Spike in oil prices: The killing of top Iranian general  Qasem Soleimani by US will impact on Indian economy as the country imports 84 pc of its oil needs. Unstable situation in the Middle East means more payment for insurance of the oil tankers that bring fuel to Indian shore. It is roughly estimated that for every USD 10 rise in crude oil prices, India has to pay extra USD 1.5 billion every month. This pushes retail inflation in the country by 0.4 pc as transport runs on oil fuel.

Political challenges: The 2020 will see two crucial assembly elections. First is the election in the national capital. Kejriwal-led Aam Aadmi Party (AAP) had defied the pro-BJP sentiments in the 2015 polls and handed the main rival its worst drubbing in the national capital by winning 67 seats in the 70-member assembly and reducing it to three.  It has to be seen whether the BJP which won all the seven seats in the national capital in 2019 Lok Sabha polls is able to dent the Arvind Kejriwal-led Aam Aadmi Party government given his high popularity. The Election Commission is likely to announce the dates for Delhi polls anytime now.

Another crucial electoral battle that will test the mettle of the BJP’s leadership will be in Bihar. The BJP in the alliance with chief minister Nitish Kumar-led Janata Dal (United) (JD (U)) and Ram Vilas Paswan’s Lok Janshakti Party (LJP) is better placed against the rival Rashtriya Janata Dal (RJD)-Congress combine after winning all but one of its 40 Lok Sabha seats. But ties between Nitish Kumar and the BJP are far from perfect. Differences are cropping up between them over sharing of seats in the assembly elections. JD(U) vice president Prashant Kishor has already floated a formula for seat-sharing that could entail at least 130 seats  Will it be able to retain its alliance and power in Bihar is another challenge.

Remember, the BJP recently lost Jharkhand that was once carved out of Bihar and the RJD sniffs an opportunity.

Polls in four states: In 2021 four states-Assam, West Bengal, Tamil Nadu, Puducherry and Kerala will face assembly elections. In Kerala, the Congress leads the time-tested alliance of United Democratic Front (UDF). In Tamil Nadu, its alliance with the DMK is on a solid wicket, while in Bihar, a pre-poll tie-up with the RJD is a certainty. In Assam, the grand old party is toying with the idea of joining with the AIUDF to consolidate Muslim votes, while West Bengal may once again see a Congress-Left alliance. In such a scenario how the BJP will tie-up in the states will be interesting.

Party organisation: The BJP organisation is expected to undergo a shake-up in the new year as Shah is likely to make way for its working president J P Nadda at the top. Now the BJP observers are wondering whether Nadda will have the same iron grip over the party as his predecessor.

State leadership, top driven: Most of the leaders in the BJP ruled states have been imposed by the Modi-Shah duo. None of them have a mass appeal except for Vasundhra Raje Scindia who had lost the elections in Rajasthan in the assembly election in December 2010. Devendra Fadnavis in Maharashtra, Manohar Lal Khattar in Haryana, and Raghubar Das in Jharkhand who were imposed by Modi-Shah have proved to be failures. Though Uttar Pradesh chief minister Yogi Aadityanath is prime ministerial aspirant he does not have the popularity of the Modi even in Uttar Pradesh. Similarly Uttarakhand chief minister Trivendra Singh Rawat does not inspire much confidence.

Undermining popular leaders: On the other hand BJP has undermined leaders who are popular in their own right be it Karnataka chief minister BS Yediyurappa, Shivraj Singh Chouhan in Madhya Pradesh, Vasundhara Raje in Rajasthan, and Raman Singh in Chhattisgarh among others.

Kashmir valley: The union territory of Jammu and Kashmir will continue to attract national and global attention. The lockdown in the region may have enforced calm, but how the government chalks a path to real normalcy has the potential to determine the course of national politics over the next 12 months.

Foreign ties:  India’s ties with its neighbouring countries are not that cordial. Relationship with Bangladesh is in a mess, ties with Nepal are strained, Bhutan has decided to extend a travel tax on Indian citizens. Relations with western neighbour Pakistan continues to be all time low.

Agitations: Will the agitation over Citizenship Amendment Act (CAA) disappear? Together with the anger among some sections over the National Register for Citizens (NRC), the two will haunt the Modi government in coming months. This has hit the image of the government headed by the BJP, especially in the student community and abroad.

Campus violence: Campus violence has become a serious issue for the universities and colleges of India as the political rivalries between the communist parties and the Hindu wing students have disrupted the smooth running of the educational organisations all over the country.

Another blow for the Indian economy?

Year of the marginalised