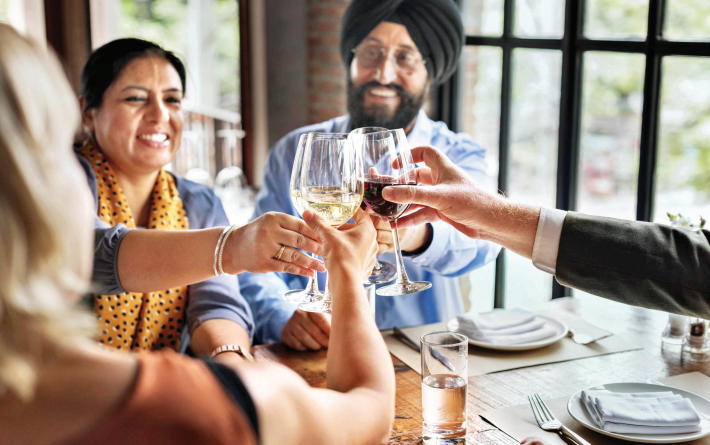 In a country where hard liquors have been ruling the drinks’ menu, wines are gradually making their way up the charts, with domestic brands giving a neck-to neck to the imported bottles.

At our wine club’s meet-ups in Delhi, I have a great time sipping varieties from around the world and India. It is a gathering of wine enthusiasts, and the tastings are sometimes accompanied with discussions on the drinks’ production, grape types, climatic conditions, wine aging, etc.,” shares Kavita Singal, a hotel-restaurant-cafe manager for Guna Enterprises, an international food and beverages company.

Wine consumption is now more common in India, a country where liquor and beers have been ruling the drinks’ menu for the longest time. In high-end cafes and bars, particularly in metropolitan cities like Delhi and Mumbai, consumption of wine has increased as people, especially the younger crowd, want to get a taste of the west and also indulge in something that makes them come across as more refined.

“I think it is mostly the 30-plus age segment that consumes wine the most. Although I have also seen a big push of the 50-plus segment switching from liquor to wine in the past four-five years, and it is quite encouraging,” says Randip Dhingra, managing director at Twist – an Asian bistro and wine bar in a popular neighbourhood in Gurugram – a city near, New Delhi. “And yes, I see people consume wine to make an impression and because of an attached ‘cool’ quotient,” he adds. While Dhingra speaks on grounds of the trends he has been witnessing, there are studies that back what he is saying.

“Consumers spend more on wines to impress. More expensive wines are being poured at business meetings, social parties and for gifting to set a favourable impression, making wine important in the social context,” stated India Wine Insider 2017, which was a report that surveyed the urban Indian wine consumers. “Wine is uniquely positioned in the consumer’s mind as a healthy, sophisticated and a less intoxicating (therefore socially acceptable beverage). These qualities are making wine unique, unlike any other beverage, thereby giving it a distinctive marketable advantage over other alcoholic beverages,” it adds.

Some experts agree, however: “Esteem is definitely a factor associated with wine consumption, not only in countries with recent wine history like India but also those that have been producing wine for centuries. Only the perspective is different. For example, if in a beginner wine country any random wine is considered a sophisticated indulgence; in a seasoned wine country a high pedigree expensive wine is considered so. There are definitely those who would like to be seen with a glass of wine purely to make an impression. I consider such people as potential wine consumers who will evolve in due course,” argues Ravi K Joshi, a wine writer based in New Delhi.

Even though an attached social ranking is what is making many consume it, wine industry in India has been growing manifold in the last few years.

Singal goes on to elaborate on her wine tasting experience to mention that Indian brands get as much focus as international ones. “The tastings include wines like Tiamo Prosecco, Danzante Pinot Grigio, Miguel Torres Chile San Medin Sauvignon Blanc, Le Grand Pinot Noir and also the Indian Sula Zinfandel Rose,” says Singal. “So the offerings are both international and national. In fact, Sula is one Indian brand, that is preferred over foreign brands by many,” she recounts.

Established in 1999, Sula is the leading wine producer in India, based in the city of Nashik, which is located in Maharashtra (west India) and is also known as the wine capital of India. Vineyards in Nashik are spread on a land of approximately 175,000 acres, lending it the title. The city houses half of the total wineries in Maharashtra. A total of 77 wineries are located in the state of which 39 are in the Nashik district alone. “Wine producers prefer setting up their units in Nashik because here they get the ideal weather and soil type required for growing grapes,” says Dhingra.

“Nashik and its surrounding areas possess a favourable terroir (a collective French word that encompasses soil composition, microclimate and other production variables) for wine grapes. Though the region has been producing grapes much before the advent of wine culture, it has received much spotlight after wine production started in the 1900s. The region’s altitude (700m) and proximity to the Arabian Sea keep temperatures moderate, which is a significant advantage for producing wine grapes especially in a tropical country like India,” shares Joshi.

“Apart from its geography, Nashik has also benefitted from a concerted effort over the years by various stakeholder agencies in the government or otherwise. Creation of a dedicated wine park, infrastructure development and setting-up of trade bodies are some factors that have worked towards establishing a thriving eco-system for wine in the region,” he adds.

Not just Sula, Nashik is also home to units of Grover Zampa and Fratelli, two other leading names in the Indian wine industry.

“Sula, Fratelli and Grover Zampa are the most preferred Indian brands. Together they own about 80-90 pc of the wine market share in India,” shares Dhingra. According to a leading Indian business daily, Sula has over 65 pc market share in India and exports to over 25 countries across Asia, Europe, the United States of America (US) and Canada.

News reports also suggest that Fratelli, which started in 2007, is India’s second-most widely distributed wine, after Sula. In fiscal year 2017, its sales stood at 172,000 of 9-litre cases in terms of volume and INR 650 million (EUR 8 million) in terms of value. Available in 16 states across India, Fratelli currently makes more than 20 different kinds of wines, and can be found in the United Kingdom (UK), Japan, Italy, Denmark, South Africa, Australia and Hong Kong.

The rising demand of domestic wine can also be credited to the fine quality that the home-grown brands are producing.

“Indian wineries are investing in state of the art equipment, are engaging with reputed international consultants, researching and developing to cultivate a greater range of international grape varietals and listings with prestigious international retailers and restaurants as also their noteworthy performance in international wine competitions,” says Joshi.

Indian brands have many a label that are on shelves at bars and even some cafes. “Grover’s La Réserve, Chêne, Zampa Soirée Sparkling and Vijay Amritraj Collection; Sula’s Rasa, Dindori Reserve Shiraz and Riesling; and Fratelli’s Sette, Vitae Tre and Gran Cuvée Brut (zero dosage) are liked well, “ says Joshi. “From other wineries there are some noteworthy wines but they are not available pan-India. Significant among these are offerings from York, Krsma and Charosa wineries,” he adds.

With eclectic options to choose from, it is of little wonder that the popularity of domestic brands is taking over the craze from international names. Wine is now a trending drink, having more consumers than ever before, and is likely to get a push once the industry handles the challenges it is facing.

While the top three Indian wine brands have been expanding their footprint abroad- Sula exports its labels to around 26 countries, Grover-Zampa is available in more than 20 countries and Fratelli in eight countries, the companies, at times, tend to face problems in distribution within the country

“One main challenge is the varying policy spectrum in the 29 states and seven union territories of India, which make it similar to operating in as many countries. Producers have to register their labels in each state, which deters smaller wineries to expand nationally,” shares Joshi on the basis of his research.

Giving us a clearer and balanced picture, Joshi goes onto explain how despite the challenges, domestic wines are gradually making their way up on the charts.

“The latest consumption figure for wine in 2016 is just over 3.2 million cases as opposed to 324.11 cases for spirits. However, the 2014-15 compound annual growth rate (CAGR) for wine is 10.1 pc against 0.9 pc for spirits in the same duration. Hence the wine market is growing fast, but it will be a while before appreciable volumes are achieved,” he says.

Domestic wine consumption as on 2016 is approximately seven times that of imported wines, indicating the dominance that domestic wines have in India at present.

“The consumption of domestic Indian wines has grown from 1.5 million cases in 2011 to 2.8 million cases in 2016. The corresponding production has obviously increased to feed this demand. Out of the overall wine consumption, the domestic versus imported wine ratio stood at 85:15 in 2011 while in 2016 it was 87:13,” researches Joshi. “Hence we can say that both the categories have grown at tandem with domestic wines having a slight edge,” he adds.

The demand of domestic wines can also be attributed to the low prices home-grown labels have in comparison to the cost of the imported ones. Importers have to incur heavy duties – 160 pc on their order, thus paying way more than the cost of their order.

But irrespective of the cost, wine enthusiasts flock to the drink – “Particularly the higher age group, which has more beverage experience, evolved tastes and better affordability will go for it,” says Joshi. “They are, after all, also looking at health benefits associated with wine vis-à-vis distilled spirits,” he adds. 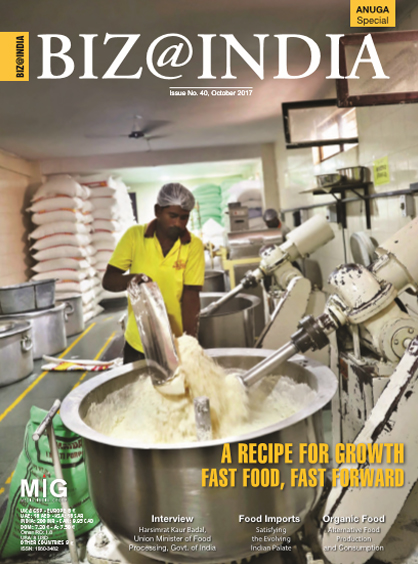 The food processing industry comes as a value-addition option for the agri class of India, which has been failed on many a occasion. The Indian government has been trying, for over a decade, to promot... Read more