The road ahead for India’s first Chief of Defence Staff
General Rawat's appointment fundamental or cosmetic? 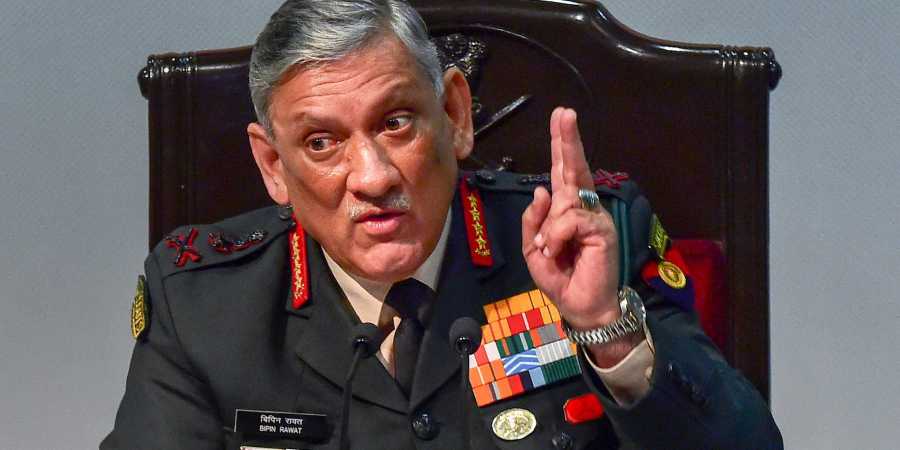 General Bipin Rawat is the first sitting Chief of Army Staff to be appointed as the Chief of Defence Staff (CDS) post. Retiring general Rawat, on December 31, 2019, was appointed the first tri-service chief with effect from January 1, 2020. Several challenges await the first CDS.

Who is General Rawat?

Highly decorated general Bipin Rawat had taken over the reins of the Indian Army from general Dalbir Singh Suhag on December 17, 2016, as the 27th chief of Army staff (COAS). An alumnus of the National Defence Academy (NDA) and the Indian Military Academy (IMA), Rawat was commissioned into the Indian Army in December 1978 in the same unit as his father, the fifth battalion of 11 Gorkha Rifles.

The first CDS is a veteran of counter insurgency warfare and has served in some of the most difficult terrains of India, including the northern and eastern commands.

During his four decades in service, Rawat has served as a brigade commander, general officer commanding-in-chief (GOC-C) southern command, general staff officer grade 2 at the Military Operations Directorate, colonel military secretary and deputy military secretary in the Military Secretary’s branch and senior instructor in the Junior Command Wing. He has also been part of the United Nations Peacekeeping Force and has commanded a multinational brigade in the Democratic Republic of Congo.

The chief of defence staff is a person who will be the single point person from the defence services and will directly coordinate with the political heads — the defence minister and the prime minister — on all issues related to the military. He will be above the three service chiefs of the Army, Navy and Air Force.

The reason for the appointment of CDS is  a single-point person as an advisor to the government on all defence and military matters. It will streamline and accelerate the process of modernisation process in the defence and security issues.

Most of the time service chiefs of three forces are preoccupied in their operational roles, the CDS will be responsible for an overall long term planning, optimising procurement of the three services and ensuring that high-level decisions are taken consensually.

This is not the first time such an idea has been floated. The post of the CDS was first recommended after the 1999 Kargil conflict to ensure better coordination between the three services. A high-level committee headed by K Subrahmanyam, a prominent Indian strategic affairs analyst, commentator, and civil servant which was set up to examine the gaps in the country’s security structure, had recommended a CDS-like position.

A group of ministers formed in 2001 and headed by the then deputy prime minister L K Advani had further studied the recommendations of the Kargil review committee and proposed the creation of a CDS.

In 2012, the Naresh Chandra task force had suggested creating the post of a permanent chairman of the chiefs of staff committee (CoSC), comprising the chiefs of the Army, the Navy and the Air Force. The senior-most among them would act as the chairman. In 2016 again, former defence minister Manohar Parrikar was in favour of the post of a CDS, and said a proposal would be made to the prime minister.

It was feared that the defence services will become too powerful and subvert civilian control over the military, a military coup will occur. There was opposition of the civilian bureaucracy to any arrangement in which their dominance and stranglehold over the higher defence set up is diminished.

Within the military, the IAF had always opposed the creation of a defence chief on the ground that it would give primacy to the army, as one witnessed during the 1971 war. Several serving chiefs of three forces felt that their position would get undermined if the CDS were to be appointed.

The proposal for the appointment of a CDS in India was first made after the Kargil war in 2001, by the group of ministers constituted in the aftermath. But no consensus emerged because of apprehensions within the three services. The ministry of defence also opposed the proposal because of bureaucratic reasons; citing that most powers will get concentrated in a CDS’s post.

Challenges for the CDS

Whether it is general Bipin Rawat or whoever is appointed as the CDS would have to manoeuvre his way through the minefield of inter-service rivalry and ministry of defence to make a success of the appointment of ‘CDS’.

Another challenge for the CDS will be to integrate training and logistics for the three services. Operational doctrines would have to be integrated. Lastly, India needs to come out with theatre command (it is an organisational structure designed to control all military assets in a theatre of war to achieve military effects).

There is a requirement for jointness and synergy in operations, intelligence, financial planning, training, procurements and human resources to optimise the dwindling resources. Also, the issue of compatibility of equipment and doctrines needs urgent attention.

At present India has 17 commands (Army 7, IAF 7 and Navy 3) co-located at the same station, nor are their areas of operational responsibility contiguous. In addition, there are two tri-service commands Strategic Forces Command (SFC) and Andaman and Nicobar Command (ANC), which is headed by rotation by officers from the three services.

The SFC, looks after the delivery and operational control of the country’s nuclear assets. It was created in 2003, but because it has no specific geographic responsibility and a designated role, it is not an integrated theatre command but an integrated functional command.

There has been a demand for other integrated functional commands, such as the cyber, aerospace and Special Operations commands, but the government is yet to approve it. General Rawat has to address these challenges with greater focus and not just look at mere cosmetic and incremental changes.

Can the BJP government untangle?

Despite international murmurs, India in no hurry on Kashmir

Pursuing its own line of thought and action on Kashmir